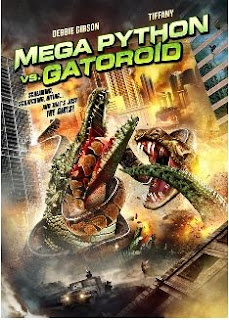 The director of Pet Semetary brings possibly the best of the Mega movies.  The Asylum just keep getting bigger and better.
Debbie Gibson liberates a bunch of snakes and Out of the Blue(see what I did there) decides to free them in a pond like two feet out of town. They get big and eat shit so Tiffany gives some gators roid rage and people start getting eaten, including Tiffany's boy toy, yes I think Tiffany is alone now(I did it again).Its go time and all the redneck hunters are out for snake blood. It was like Swamp People without Troy and CGI gators. Gators get bigger and Snakes get longer. CHAOS.
As I have said many times I love The Asylum. They got this movie right. It starts right off the bat. The gators look bad ass and its got plenty of funny moments. It's nonstop kill after kill after hilarious bad acting with creatures that will fuck your shit up.  You will witness the most epic fight scene ever. It gives They Live a run for its money.  Their is a montage to what I assume is a Debbie Gibson song that is fanfuckingtabolous.  Animation, science and gators growing at a rapid rate. Debbie Gibson in a white wet short ass dress and Tiffany's boobs are always in lens.
I suggest all get a sixer put this on and just sit back and be entertained.

Tromeric
Posted by Guts and Grog Reviews at 8:39 PM

I see what you did there. This might be your best review ever! Fuckin' love it, wanna put it in my butt.

In total agreement, I loved this one. Only in my dreams could there have been a cat fight like the one between Gibson and Tiffany (see what I did there?)