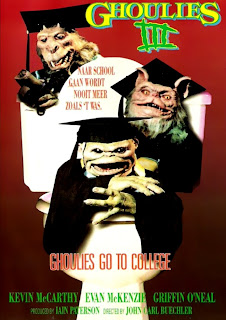 We have a guest review from Mr. Gable. If you wanna no bad movies get your asses over there. He is the authority.

I'm drunk. and I just watched quite possibly the greatest fucking drinking movie of all time. Ghoulies 3. I need to thank Master Grog for pointing out to me that this movie owns. I own the movie on VHS and its just kinda been sitting there and had it not been for his wisdom...it probably would have sat there until I owned all 4.

Which is completely UNNECESSARY.

Fucking watch this, if your bad movie cock doesn't grow 10 inches you're too much of a fucking pussy to exist.

So this movie is just one wild fucking prank ride after another! It's corny, its crazy, its fucking ghoulies. They come out of a toilet. That was kind of the gimmick of the first one. But here we are in part 3, and even though I haven't seen part 2, part 3 exploits the shit out of the toilet. They just can't FIT IN enough shit jokes. It's just so AWESOME.

Ghoulies 3 is what I would describe as the bastard love child of Gremlins, Animal House, the 3 stooges, and Charles Band's Full Moon brand of insanity. John Carl Buechler, the director of Ghoulies 3, is a long time associate of Charles Band. Although Band has nothing to do with Ghoulies 3 (aside from INVENTING ghoulies in the first place) Buechler definitely brings Bands influence to this flick. Buechler HAS worked with Band on films like Troll and The Dungeonmaster. Insane fucking movies. Ghoulies 3....no different.

If you are looking for A GOOD TIME, I mean a visual EYEGASM, Ghoulies 3 is where its at. I had my reservations, so much so that I found reasons NOT to watch Ghoulies 3, but in all honesty, I was won over in the first 3 minutes. This movie is bad movie GOLD. Every minute is better than the last 5 minutes. Fucking watch it. And do it drunk. You'll laugh so much harder.

Mr. Gable
Posted by Guts and Grog Reviews at 3:43 PM

Mookie lives. Inside the heart and soul of me.