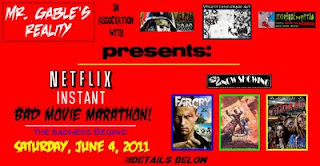 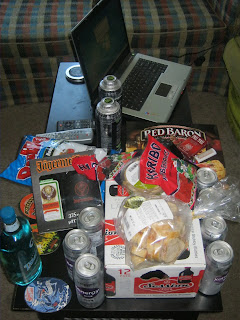 A couple months in the making and last Saturday it was finally time. I got off work and made a trip to the store to get the essentials, by essentials I of course mean snacks, beer and booze. I was set, I had all my snacks and booze, a laptop, my Ipod, my PS3 and my Netflix cued up.  It was go time. I watched a couple of episodes of 1000 ways to Die in anticipation for this epic night I was about to embark upon.  While they were playing I had a few beers and started shitting all over Facebook and Twitter reminding everyone to drop whatever they were doing to join in on the fun.  My friend over at 365HorrorMovie informed me he was gonna run to the store to get some rum and would join us for the first film. I of course knew once he started there was no quitting but I let him go ahead believing he could watch just one. It was getting close, I got my group set up to make it easier for keeping up with everyone.  What started with four had become seven.  We had of course me, the previously mentioned 365HorrorMovie, Morbidementia, our host Mr. Gable, Mrs. Gable, Vincent, and GlitterNinja.  The rules were simple. We would all watch specific movies at specific times while drinking the grog and we would post our smart ass opinions on Twitter. It was our version of Mystery Science Theater 3000 for the modern age.  I even drunkenly sent Michael J Nelson a twat explaining what we were doing. No response though. I like to think that he would of joined in if he wasn't busy but I will never know. Anyways back to the rules. We would use the #badnetflix hashtag to keep them in one area in the world on twitter, aside from Vincent who decided it was a #badnetlfix, I am guessing that was the boozed up frappuccinos he was partaking of. What happened as we got going was magic. I instantly was having  a blast. Seven people in different parts of the country and even multiple timezones were watching these shitty/awesome movies at the same time. It felt like we were all crammed in one shitty basement. I can't even describe the fun it was.  We did three movies and while some where better than others I enjoyed the whole thing.

We started with Farcry. A movie by my master Dr. Uwe Boll. Shockingly it is based of a video game. Dr. Boll will be branching out later this year when his movie, that I am guessing will offend the whole world Auschwitz comes out. Back to Farcry. Wow. Its a piece of shit. Boll always gets a budget which some may find shocking but I will continue to watch his shit till I am withered up and dying.  As 365HorrorMoive pointed out its probably not fair to riff an Uwe movie but fuck it, we make our own rules.


Next up we went for the Moon. Well Herc through a bear there at least.  The man that brought the splatter classic Contamination directs the Hulk in this insane but fucking amazing tale of Hercules.  Yeah he throws a bear in space and lots of other insane things happen.  This movie was a blast and should be experienced by all. Vincent even drew an epic picture that I must share with the world of one of the  greatest moments on celluloid 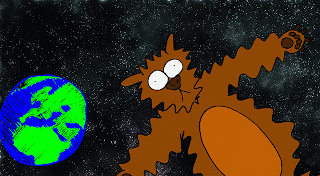 We ended the night with RetarDead. Yes it is about tarded zombies. Yes its as bad as it sounds. Yes I am glad I watched it. It was the end and most of us were pretty far deep in the drunk tank, which is probably the only reason we survived this. I only recommend this to the truest appreciators of bad cinema. It is from the man that brought us Monsturd which was shit, pun intended. It was however shit I enjoyed the shit out of. Wow that's a lot of shit. Yes good shit.
Well there is a rundown(minus the Rock) of one of the greatest nights on the internet, patent pending from Mr. Gable.  I will leave you with a few of the twat highlights of the night.

"Wow, Powder really buffed up." (twat of the night in my opinion)


"Magic pants dance, when is Bowie suppose to enter?"

"Rainbow Bright was in charge of Cinematography."

"Special Army. I hope they have one of those in RetarDead."

"This movie Uwe's you an hour."

"I wish Hercules would show up and throw this movie into outer space. "

"I think the princess just creamed her burka."


"Wait, and Uwe Boll movie? Is that even fair?"

"Id rather lick semen samples of windows than listen to this sheriff."

"Well at least RetarDead makes you glad its over."

"You just bent my erection."


"I would let Udo Forcibly make me a dendrophilliac. Is that weird?"

"Uwe was inspired by Cobra Triangle for this boat scene."

"I would shoot a load of rainbow bullets out me cock if Dolph showed up."

"So does a RetarDead  Zombie like eating its own ear?"

"Jim Wynorski would role his eyes at this."

"That was kinda like the strip poker scene in Terror Toons. It went on for like a half hour and no one lost. Except  me."


Well there you have it. A great fucking night in review.  I know we will be doing this again with more people and I highly suggest anyone that can join in. It was more fun than I could ever put into writing. Like all good things it had to end, once it did I was very ready. I had a full day of waiting on people and I was drunker than my dad was when I was born.  I made my way to the house of nerd and passed the fuck out. Till next time bitches.

Tromeric
Posted by Guts and Grog Reviews at 9:47 PM

Great write up! Glad you liked my bear, although it wasn't half as good as the fake stuffed bear Ferrigno was hammering on in the forest fight scene that still had leaves stuck to the fur from previous takes.

Man o man, I can't wait for the next one and you KNOW there's GOT to be an October Horrorthon. Can't wait can't wait : D

EXCELLENT WRITE UP MY MAN! That night was epic. I was pretty happy a couple other people joined in.

That's something I forgot to say in my post was how COOL it was to be watching movies with several other people in several other parts of the country. That's amazing. I loved it.

I can't wait for part 2. I'll have to see how my summer pans out but I like Vincent's idea for a Octoberween BadHorrorthon. There's just so much epicness to choose from!