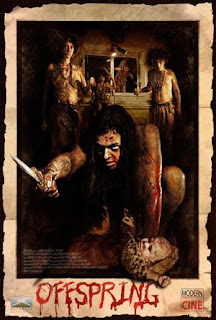 One of my favorite Jack Ketchum novels comes the screen in a noble attempt. While not a perfect film you can see that they used every resource they could get with the budget they had. Overall the acting is pretty damn good, with a few exceptions, the children do surprisingly well, and even all the baby's do pretty good, especially playing dead and dismembered baby, well played son. Most of the crazy lighthouse keeper kin come off pretty frightening, I will admit there are a few moments where its questionable, but like I said with the small budget I am more than impressed, most of the time it was very similar to what I pictured as I was reading the Novel. All of the leads give very ballsy performances and show no fear as if they were a clever T-shirt from the 90s. The special effects are fucking great and all in all if you wanna see some sick shit that even the august underground mordum guys would be jealous of, some compelling writing, and dead baby's(and who doesn't) track this shit down.

Eric
Posted by Guts and Grog Reviews at 10:36 PM