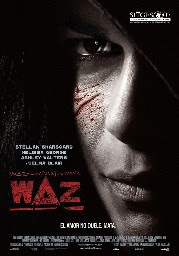 So Somehow the same man that brought us this years "The Children" previously made this bloody shit vain. Like Screeching Weasel My brain hurts, at a mere 100 minutes this felt as if i was watching Fassbinder's Berlin Alexanderplatz aside from the major difference being Berlin Alexanderplatz is not a piece of shit and even at 15 and a half hours is stil easier to sit through. It seem as if he was trying to recreate the world of Silk Stalkings with a bit of Duckman, and the grittiness of NYPD Blue, again those shows are at least entertaining. This movie hurt me, for real. The screenwriter just randomly through in plot? twists. Stellan Skarsgård plays the detective as if he went to Lt Amos school of acting. I don't even know what to say, I rarely regret watching a movie, no matter how bad or painful it was but god damn it I want what was taken from me.

Eric
Posted by Guts and Grog Reviews at 10:09 PM