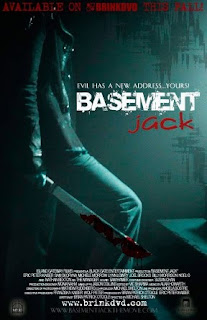 Decent Low Budget Slasher/Killer fare. Lynn Lowery who used to be one of the hottest woman in the world, well let just say while I would of fucked her while there were weird sex slugs crawling around her, now that she is just a crazy old mom who uses her son to recreate the Struck by lightning scene from Great Outdoors I...aah fuck it I would still fuck her, I would just show everyone the publicity shots from Shivers. Anyways back to the film in question, and the question is why did I somewhat enjoy this? The effects were bad, Knife threw head was done in photo shop I think. They have Tiffany Sheppis in this as a cop, not a sexy stripper cop but a wearing way to many bulky clothes cop. That's like putting Brinke Stevens in a Nun roll, and not the sweet kind that gets her pussy eaten by her disciplined schoolgirl students. Michele Morrow is pretty much fully clothed all the time, that is a sin. Michele Morrow and Basement Jack have a Matrix style bullet time fight. Yet with all these things, i suggest watching this, man I am fucked up.

Eric
Posted by Guts and Grog Reviews at 9:15 PM