You're Gonna Swim Out Of Here In Your Own Blood, Shit Stain: A Trip To The The Lost Empire 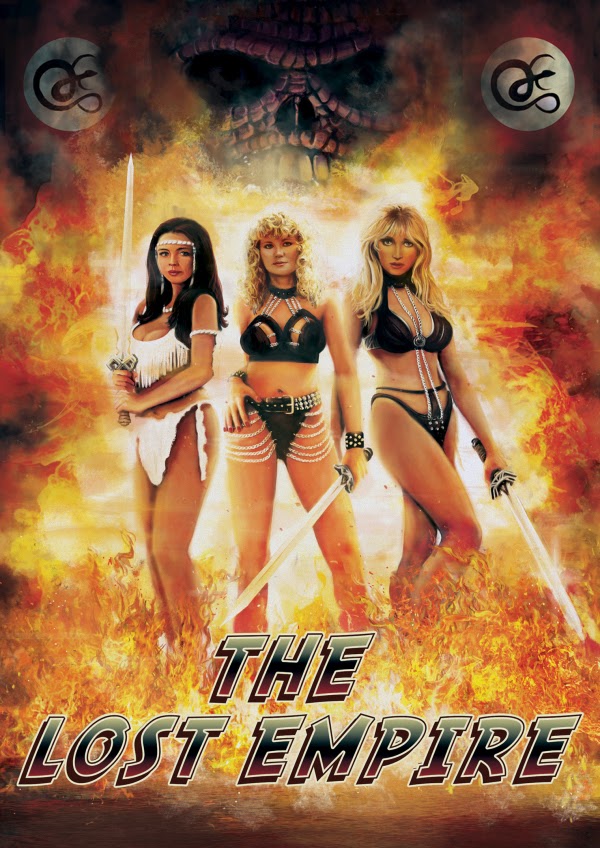 Jim Wynorski is a name thrown around quite often at the house of grog. I know I grew up loving this man. Deathstalker 2, Chopping Mall, Not of this Earth, Cheerleader Massacre, Return of Swamp Thing. I could go on and on. Sure, maybe not all of his films are five star cinema, but they are generally entertaining. Even his lower budget made for skinemax shit ends up being a good way to kill eighty minutes. When I was first notified about reviewing this, I was shocked that I couldn't remember watching it. It is possible I may have seen it on an episode of USA Up All Night, or rented it off the wall at the video store, but I doubt it as I have a feeling I would remember this. I mean this is where one of the men that shaped my love of genre started out. I knew I had to see it whether or not I had in the past. I poured myself a glass of grog, popped in the disc and sat down for a journey, a journey to The Lost Empire.


After a title sequence reminiscent of  a crime film from Italy we end up smack dab in the middle of a bank heist that the Foot is leading. A cop is shot and killed, then the Exterminator shows up and neutralizes the situation. The Exterminator also ends up being a babe, and his sister. She vows her revenge, and after an investigation ends up leading her to a doctor on a mysterious island,  she finds she has a lot to deal with.

Ninjas, wizards,Angus Scrimm, and deadly babes are just some of the obstacles she will have to face, along with the two other ladies she enlisted, as she joins a tournament that can only be described as Mortal Kombat with more scantily clad woman.


I had a ton of fun with this beast. I felt that same excitement I felt in my bedroom as a child watching late night TV such as UP All Night, Monstervision, and late night Cinemax. It has everything I want in a B film. Lasers, babes, rubber suits, sexy ladies fighting a gorilla, blood, and more babes.

The music is great, the whole time it reminded me of a John Carpenter action opus such as Escape From New York, or Big Trouble in Little China. This all made sense, as at the end I saw Alan Howarth's name in the credits under music.


The disc itself isn't what I would call fully loaded, but it does have a commentary, trailers, a slideshow, and my favorite extra. A menu where you can go to any moment of the soundtrack and hear the awesome that Alan Howarth has brought forth.

Never seen this one, but now I want to. The cover says it all to me LOL I'm not expecting much, but it looks fun. Great review!

Thanks! Definitely check it. A ton of fun.