2 Extremes: Out for Pizza, Then I am Going To Take a Huge Shit......Movie Fest


When I Eric first asked me to take part in the "2 Extremes" event for the G&G blog I thought I had a good idea in doing a post on two very different Surf Flicks; the 80s Troma release "Surf Nazis Must Die" and the early 90s kiddie flick "Surf Ninjas"! But then after watching both these turds back to back a few Saturdays ago I couldn't think of anything interesting to say about either of them besides that Gail Neely (Eleanor "Mama" Washington in Surf Nazis) was way better then that movie deserved and should have been featured in her own film franchise! And the subject of "Surf Ninjas" I found it extremely unrealistic that the kid was always on his Sega Game Gear because everyone knows those things had such a SHITY battery life!

So with those two movies out, it was back to the old drawing board and I decided on writing about two films I saw a week apart at the movie theater when I was 9 years old . . . "Teenage Mutant Ninja Turtles II: The Secret of the Ooze" & the Seagal flick "Out For Justice"! 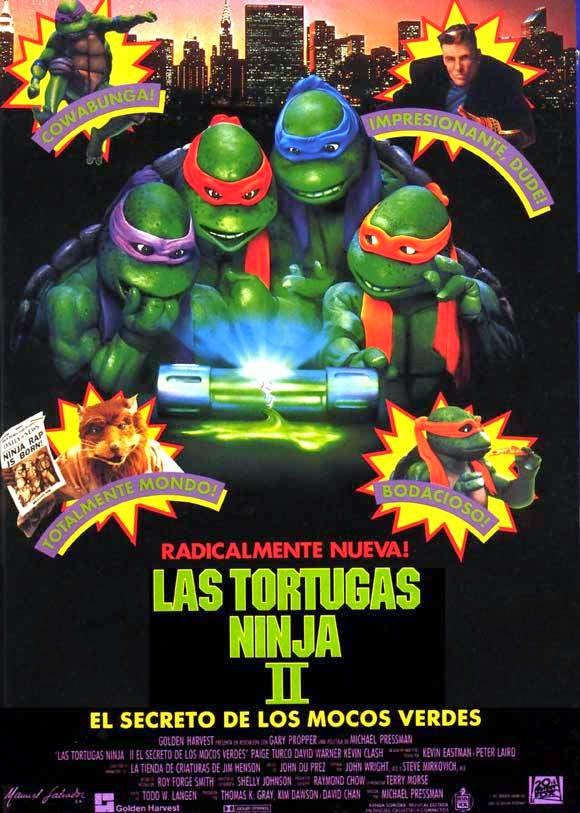 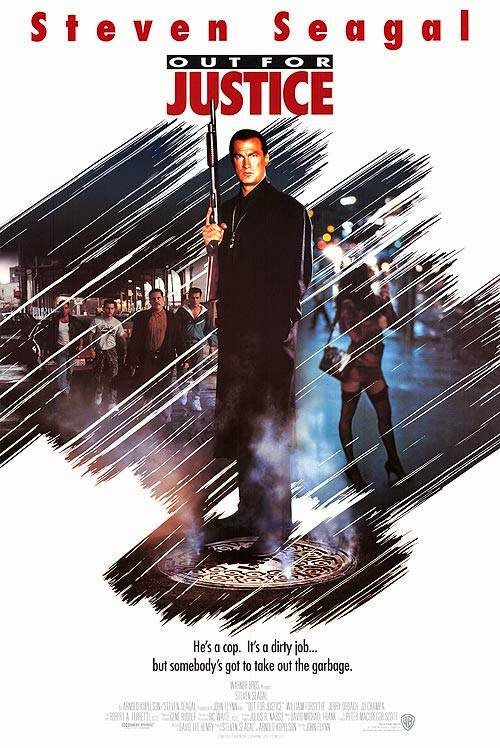 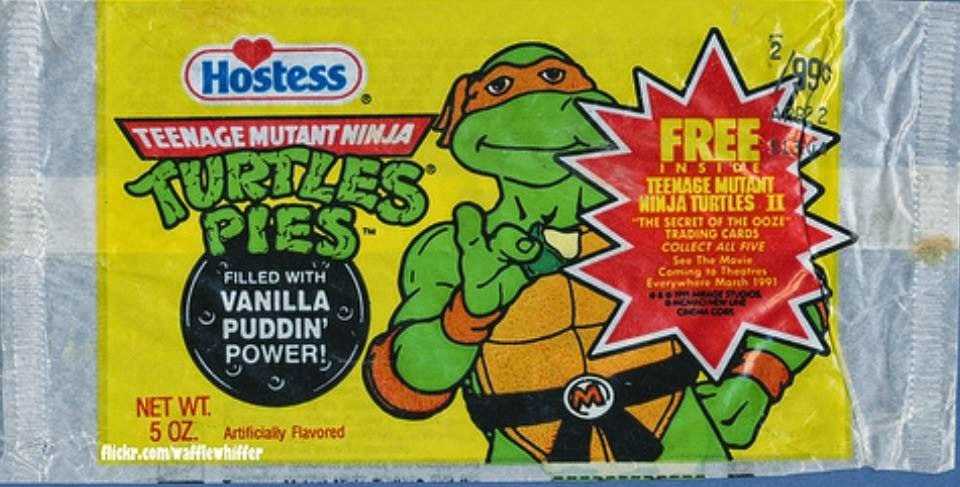 Back in the Spring of 1991 I was a full-blown Ninja Turtles addict; if there was turtle product on the market there was a good chance I had it! I would play with all the toys, watch all the cartoons, reads the comics, and eat those barely edible Turtle Pies on a daily basis! As you can probably imagine I was eagerly excited about the second Turtles film coming out and since it was a few days right before my birthday, my Uncle Bob agreed to take me to go see it that opening weekend. In a cruel twist of fate all shows were sold out and we ended up seeing the Albert Brooks film "Defending Your Life" instead of going home. Nothing against "Defending" cause it's actually a cool little flick but at the time all the jokes went way over my head and went home that night very disappointed! A week later my Uncle made it up to me by taking me to see the Turtles film, right off the bat I noticed a lot had changed in the year since the original flick came out! For one my favorite character Casey Jones was Missing in Action, April was played by some new lady (though way Hotter) , and maybe worse of all the Turtles barely even used the weapons they were each best known for over the course of the movie! Those complaints aside, I absolutely fell in love with the second Turtles film and would consider it the peak of my Turtles Fandom because by the time the third film in the series came out I was interested in going to see in it's theater run at all and didn't watch it until it came out on VHS. There's a lot of factors that go into my dwindling interest into the Turtles. For one the cartoon and toy line had lost a lot of steam by 1993, but also for me it's the movie that I saw the following week after "Turtles 2" that changed my perception of what an Action film was!

That film was "Out For Justice", and I have my Uncle to thank for taking me to my first R rated film in the theaters! At the time I had no clue who Steven Seagal was, but O.F.J. was just about the perfect introduction one can have to Man with the Ponytail and to this day I consider it one of the most absurd movies ever made! Seagal stars as New York Cop "Gino Felino", early in the film Gino's partner "Bobby" is killed in cold blood in front of his family by a crazed crackhead named "Richie" played brilliantly by actor William Forsythe who really steals the show in this movie with his unpredictable antics! 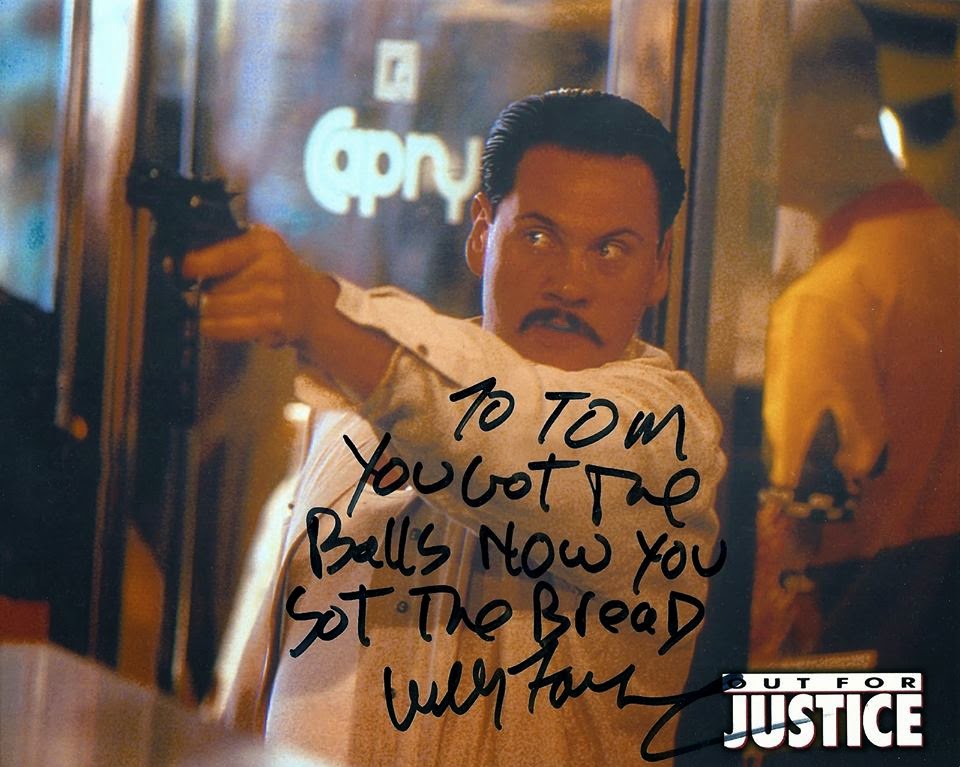 The movie more or less is a cat a mouse chase around New York city with Gino hunting Richie and his Crew everywhere from a low rent bar, a butcher shop, chop shop, a whore house, etc . . . So what make this movie so absurd? Well for one look at this ridiculous outfit that Gino sports for a good portion of the film early on . . .

It's pretty hard to take him seriously looking like that!

Also even though it was his partner that was murdered, there is no way the police department would allow just one cop to go looking for the murderer, the whole force would want to be involved in catching this prick!

One of the most hilarious scenes in the movie (or any movie for that matter!) is when Gino takes down a whole bar that is owned by Richie's brother Vinny .

Is that not the best thing ever? All these years later I still wonder who's Hot Dog that was!

So would I recommend these two films as a double feature?

Even though one movie is ratted PG and the other R, both films are extremely cartoonish in the way they handle their violence. For example in the video of the bar fight I shared above from Out For Justice features one character named "Tattoos" getting most of his teeth knocked out by a cue ball only to be completely fine about an hour later relaxing at Richie's hideout! I could totally see the Turtles and Gino crossing paths in NYC! Like all great crossovers they would fight due to a misunderstanding early on, but later team up to take down the bad guys and then go out for a pizza later to celebrate! 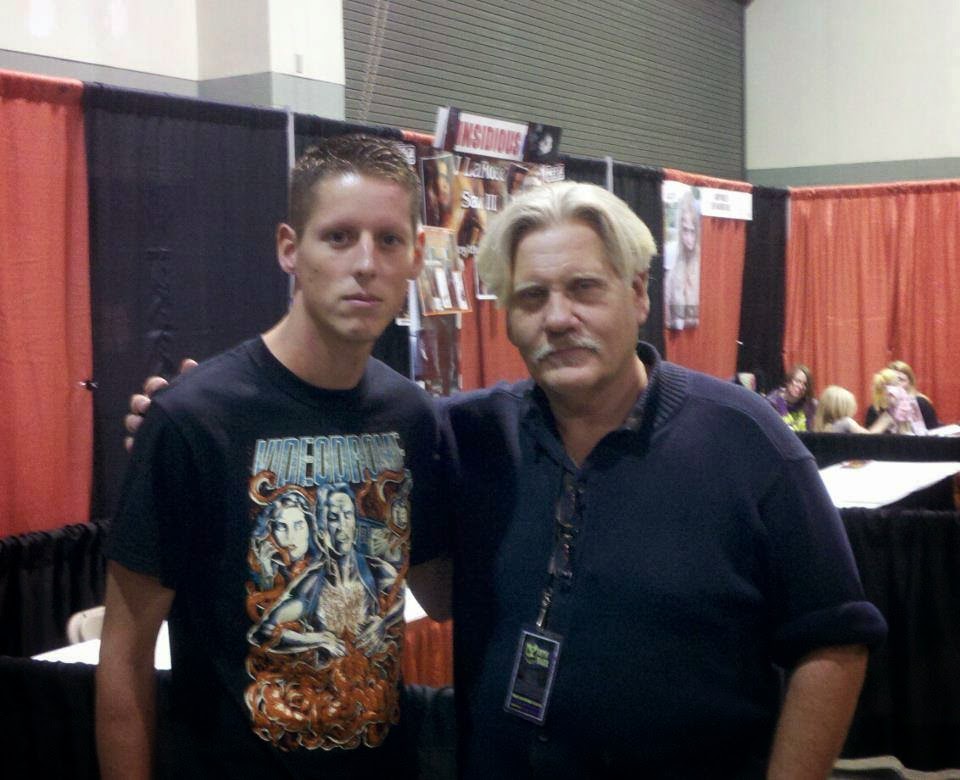 Tom runs Shit Movie Fest which  is a Blog and Facebook Page based off a monthly "Bad Movie Party" he does with his friends in Philadelphia! The first SMF Party was no different than what him and his  friend Chris were doing since they met in High School back in the 90s when they would watch a few movies and trash them, but over time SMF has continued to grow in both attendance and support from friends new and old!
Posted by Guts and Grog Reviews at 5:12 AM