You're Next- Adam Wingard 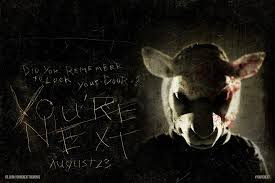 I haven’t been sleeping well this week, and I blame director Adam Wingard. I used to watch a lot more scary movies, but had to ease off due to too many nightmares. But when I first read about You’re Next sometime last year—billed as a new take on the home invasion film (I’m a sucker for The Strangers and Funny Games), deemed a part of the “mumblegore” movement (don’t hate me, I like mumblecore, or any dialogue-heavy indie films), and featuring a strong female lead that subverts expectations of the traditional female lead in horror movies—I knew this movie would be worth a few nights of poor sleep. I won’t discuss the merits of the gruesome kills (I know my limitations, closed my eyes, and let the sound effects be enough) or whether the twists held up (I think they did). What I want to talk about is Sharni Vinson’s character Erin, the protagonist who brings something new to the horror film genre.

If you don’t already know the plot, let me sum it up: a rich WASPy family reunites at their parents’ huge and secluded home for an anniversary dinner. Part way through the sibling rivalry and passive-aggressive dinner conversations, an arrow breaks through the dining room window and enters the head of one of the guests. Chaos ensues from here. Tears, screams, and the occasional bickering begin as the three cutesy animal-masked killers move in on the family. Everyone panics save for Erin, the girlfriend of middle son Crispian. Her survival instincts (she grew up on a survivalist commune in Australia) kick in immediately as she rushes to cover an arrow wound, seals up the home, and searches for potential weapons. By the movie’s end, covered with her own blood and others’, she proves the unexpected foe for the unwanted visitors.

Let me preface this review: I don’t think this film has a perfect representation of female characters. I’m not sure any horror film does (please share if you have one in mind because I’m not closed off to the idea and would welcome the recommendations). The first female character introduced in the film is purely a sexual object (tits out, no name) who dies fast and without a second thought. The other supporting female characters are either pathetic, sobbing victims (the matriarch of the family has to be put to bed like a child after the deaths begin) or else are hyper-sexualized. What I offer up in defense of You’re Next as a prototype for thoughtful depictions of females in horror films is that it takes the classic “last girl’ trope and takes the first part out of the equation: Erin is never a victim who has to rise above and find the fighter within. She is a fighter from moment one. There is never a moment of hesitation that she will survive once her fighting skills and quick reactions are put on display.

The “last girl” concept has been a staple of the horror genre. From Friday the 13th to Halloween to The Texas Chainsaw Massacre, horror films have been built around the idea that the main female character, victimized and mournful over the loss of her friends, will find something within her to stand up against her tormentor (or at the very least, get the hell out of the situation). The 1970s gang rape revenge I Spit on Your Grave took this premise to a new level, but still featured the same flaw—the female has to be hurt and pushed to the extreme before she saves herself. Wingard and screenwriter Simon Barrett admitted to finding inspiration in Wes Craven’s Scream when creating You’re Next, which features another female protagonist fighting back after her friends have been picked off one-by-one.

What I love about You’re Next is that Erin helped me feel less afraid—that sounds a bit after school special, but that doesn’t make it less true. The audience I watched the film with was made up predominantly of women. I went with my close friend and horror fanatic, and while we both cringed at the sight of a slit open throat or a machete to the head, as soon as the power struggle shifted and Erin was the one wielding household tools and introducing them to people’s skulls, we sat up a little straighter in our seats and paid attention. Because honestly, sometimes being a twenty-something woman is scary. Between news reports of basement enslavements and worldwide sex trafficking, we don’t always feel like we have power. So yes, I looked when Erin shoved a screwdriver into someone’s eye socket.

The moment the killers stepped inside and squared off with Erin, this formulaic home invasion film was turned upside down by a warrior of a woman. Suddenly the victim wasn’t just playing defense, she was changing the rules of the cat-and-mouse game. One mouse, three cats, and many buckets of blood. Who knew the chick from Step Up 3D could kick so much ass?


- Kait Heacock
Posted by Guts and Grog Reviews at 3:32 PM

The "last girl" in this film totally makes this film. She was just such a badass from start to finish.