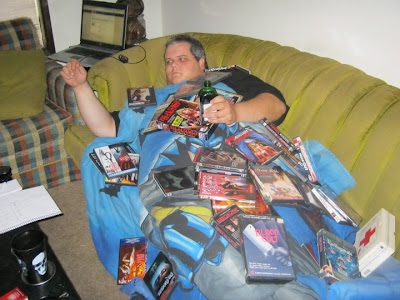 It is my favorite time of year. The heat is almost gone, the streets look like the filming of  John Carpenter's "Halloween," and there are masturbating bums outside of my house. Well, that last one is a year round thing actually. My life is horror 365 days a year, but there is something about the Halloween season that makes it even more important. I buy anything and everything that has pumpkin flavoring, I hit up all drug and grocery stores looking for new decorations, haunted houses open up, the theaters start playing classic horror films, and I spend a whole paycheck on monster cereals.

One of my favorite things to do during the season is marathons. I have been doing them for years. Some huge, some just a few days. This year I am a judge for a marathon competition known as "The Madness." I am honored and excited to do this, but I also want something for me.

Jeremy Gaulkenstein brought it to my attention that this is the first year since 2002 that there is a Friday the 13th in September. A little back story. Back in 2002 we set out for a 49 days of horror marathon. It got insane. We did nothing but watch horror movies  day and night, with interruptions only being caused by trips to the video store, or the corner store to grab some 40's.  It was one of the best times of my life. We watched over 300 movies, wrote reviews in our shitty little notebooks and had a blast. This in theory is where Guts and Grog was born, so it only seems fitting to pull it off once again. Things are different now, sure. Most of us either live in different states or sadly have passed away. Sure these things put glitches in our system, but you're a goddamn lunatic if you think that will stop us.

So here is the basic premise. Starting this Friday, I will only watch horror films for 49 days. That's right, all the way until Halloween. I will be posting reviews throughout. Most of the reviews will be quick to the point ones. Also on this journey, while not in the same state, I will be be accompanied  by Jeremy Gaulkenstein, Gabe Nye the Science Guy, and Jacob VonKlingele. We all will be watching separately and posting reviews as we can. At the end we will tally all the films and get a final count. Is there any real reason to do this? No, not really, but it is fun, and a way to honor our fallen grogsters and watch a metric shit ton of horror films.

A 49 day horror spree is an awesome idea, I have much respect for this endeavor.

Well, have fun and enjoy the hell outta your madness =)