Jeremy from Critters and Gods stopped by to talk about The Asylum, and show off some new posters he has made based off their films. He also is going to give away a print of one of them. Make sure after you read the article to check the bottom for info on how to enter one of the great pieces you see throughout this article. 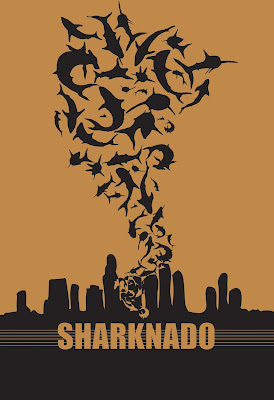 The first Asylum film I ever saw was “100 Feet.” A decent ghost story, relatively well produced and cast, nothing remarkable but certainly not horrible. The last Asylum film I attempted to watch was “American Battleship.” A “mockbuster” or “tie in” to the at least equally horrible mega budget “Battleship.” The “mockbuster” has become Asylum's bread and butter much to the chagrin of certain megalomaniac movie producers. I jumped on the Asylum hate wagon at first. With shameless titles like “Transmorphers” or “Battle of Los Angeles” the studio's stock and trade seemed to be out and out plagiarism or whatever the fuck the film equivalent of that is. And Asylum was taken to task and court numerous times for their new found business practice. And I wrote them off, even when they started doing equally horrible but entertaining creature movies for Sci-Fi. I've never been able to get through one of these movies on my own but a couple years ago, at the behest of Tromeric I gave a shot at a drawing inspired by the Asylum creature flick “Two-Headed Shark Attack.” So I doodled my version of a two-headed shark and made a crappy little poster and sent it to Eric. I got the best response I'd ever gotten from anything I'd ever drawn, granted I'd only been drawing for about a year or so at that point, but it was still exciting. Then one afternoon Eric let me know that David Michael Latt had shared my drawing on the Asylum Facebook page and then Cleve Hall (Monster Man and creator of the Two-Headed shark) followed suit. At this point I was also very new to social media so I really had no idea how little all of this actually meant but fuck it, it was exciting and I learned a lot. I made a few shirts and tried to sell them, did posters and contests and on and on. And all the while Latt and Asylum were tweeting and sharing stuff about it. I liked that instead of having to worry about getting a cease and desist letter or something, the company that created the monster I was making weed money from was actually encouraging me and sharing it. So I got a little more curious about Asylum. I learned a bit more about their business model, history, and very quickly realized that they were certainly not the first to apply this model. It looks slightly different because of the social media component that inflates a lot of the entertainment industry and because of the kind of cultural dark ages they happen to be doing business in but Aylum is cut from the same cloth as a Corman, a Yuzna, or a Band. Here are the four reasons I stopped worrying and learned to love Asylum.

The point of all this is I made some posters for some Asylum movies and encourage other artists to do the same. If not for Asylum then for movies that nobody cares about. Find a crap movie with a great title or great scene and do something with it. There are fantastic images hidden all over.
The creatures Asylum is creating will resound in our culture consciousness for a long time. We'll get out of this remake wasteland eventually and back to solid well crafted horror stories but until we do there will be folks like the good people at the Asylum. Churning out movies as fast as we can demand them. Instead of looking at them as some kind of Lamprey eel, in the grand scheme of Hollywood nonsense they're really more like Pilot Fish. Remember Roger Corman eventually won an Oscar


To win your choice of one of the three posters you have seen just go here and like the APEP Facebook page. Then either leave a comment, or email goreandgrog@gmail.com telling us what your favorite movie poster of all time is. Include which of the 3 you would like if you win, and a way to get a hold of you.  It is that easy. On the 27th of September I will put all entries in and randomly draw a winner.


* Sharknado and Nazis At The Center Of The Earth will be matte prints, while the 2 Headed Shark will be on sketch paper.
Posted by Guts and Grog Reviews at 4:27 PM

My favorite movie poster of all time is NoES 3: Dream Warriors. I would literally drive myself into the eye of a real Sharknado for that Sharknado print.

My favorite poster would have to be Maniac. I don't think there's another poster in movie history that captures the essence of the flick as well as that one. If I win, I want the print of my all time favorite Asylum flick, Nazis at the Center of the Earth.

That Trick or Treat UK Quad is the bees knees.

I want that Sharknado print. Shit is amazing.

id be hard pressed to say what my all time favorite is...first that comes to mind is for bram stokers dracula- it was my daughters favorite movie when she was a toddler, and she had the poster on her door (and mickey mouse sheets on her bed).

nazis at the center of the earth is AWESOME. wants.
ginamink@gmail.com