Well things have been a little crazy in my neck of the woods lately, but I thought I'd throw together a couple of quick reviews for some newer movies I managed to catch over the weekend while I was at the House of Grog. 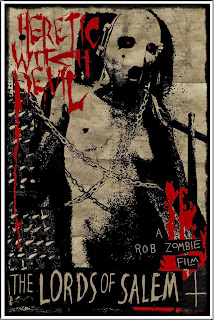 This is a movie I've been really anxious to see.  A lot of Zombie's films are hit and miss for me, but the second Halloween really gave me hope that he was finding his groove.  It was a movie that I really enjoyed, despite the fact that I really didn't care for the first one.  Well Lords is exactly what I was hoping for.  It's an original story, though admittedly weak in that department at times, and doesn't just rely on shock or familiarity to entertain.  This movie is beautiful to look at and mesmerizing  to watch.  Even when the story slowed down or lost it's way I couldn't take my eyes and ears off the screen.  It really gave me hope that Zombie is going to turn into someone who makes movies, not really long music videos.  This is one that will definitely be going in the collection at some point soon. 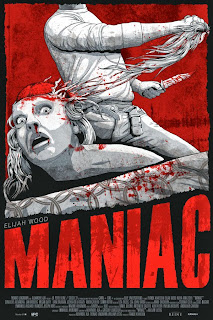 Much like Tromeric I really wanted to hate this movie.  The original is one of the few grindhouse style movies that I really consider a great movie.  Most of them I find fairly boring, but Maniac always rose above the pack, with a raw, dark story to tell.  The only thing that gave me hope for this new one, was Elijah Wood.  He's an actor that has really grown on me over the last few years and he just straight kills it in this.  A lot of that is due to the incredible use of first person.  I really wasn't looking forward to sitting through a bunch a shaky unwatchable camera work, but the end result is a smooth, floating camera that bring you right into the world of the killer and aids in the suspension of disbelief that Frodo could straight kill a bitch.  The movie has an unsettling atmosphere and implicates you in everything that's happening and really makes Wood's character well rounded and relatable in a very uneasy way.  From the cinematography, to the music, to the well done, visceral gore  everything just works, as much as I didn't want it to.  As a side note, I love this score and had been listening to it for about a month before I'd even seen the movie, I can't recommend it enough. 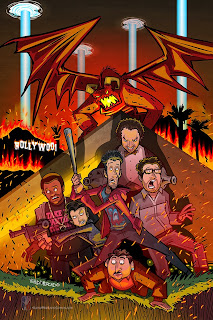 This is the End
Director: Evan Goldberg & Seth Rogen

Holy shit, I don't even know where to begin.  This is one of those rare comedies that actually lives up to the hype.  I kept hearing all this talk of how amazing it was, and it totally delivers.  This is a movie that will end up being a classic that's remembered and quoted for years to come.  Everything works from the set up, to the endless barrage of jokes that rarely miss, the slightly skewed characters, the apocalyptic story it becomes, and the little bits of genuine emotion sprinkled through out.  Bottom line, I laughed my ass off start to finish and can't wait to watch it again and catch everything I missed while I was pissing my pants with laughter.

Posted by Guts and Grog Reviews at 1:03 PM