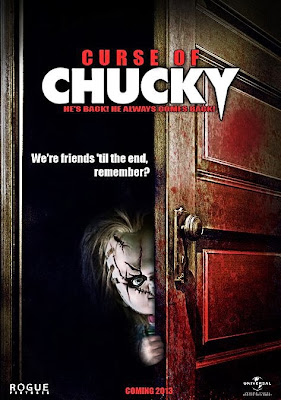 I have always been a fan of Chucky. I saw the first couple in the theater when I hadn't even reached double digits in age. Over the years each sequel got more and more goofy. I was not against this. I actually really enjoyed Bride and Seed, but they definitely had changed tonally, as do most sequels. When I got the first info about Curse it was stated that it was going back to a more serious tone like the first. This intrigued me, but also worried me. Could it work? I watched the trailer and was not that interested. It looked like it was gonna be another straight to DVD sequel that had lost touch with the rest of the series, granted the rest of the series had already lost touch with previous entries, so there's that. Well I decided to give it a go anyways and was more than pleasantly surprised.

It starts off with a great intro that sets up the tone and story perfectly. You're in a big old mansion that kind of feels off. You meet Nica played pretty brilliantly by Fiona Dourif, daughter of Chucky himself, Brad Dourif. She receives a package, that of course ends up being a good guy doll. You know shit is going to get real now, and it does.

To say I had reservations about this would be an understatement, but luckily most of them quickly disappeared as I watched the film unfold. I had assumed it would be full of ridiculous CGI, especially when Chucky was involved. That  was not the case. Chucky still had that look when he moved, you know the way  a mother fucking puppet would move. The music is solid. It really helped the story and the atmosphere. Mancini managed to build quite a bit of tension in this. There is a scene where the family is having dinner and the food may or may not of been poisoned that had me squirming quite a bit. The pace is pretty great throughout, there are a couple points in the middle that kind of lose the flow, but it quickly picks back up.

Tony Gardner came back for the effects and Christ are they awesome. As with Chucky, you will find very little CGI here. Practical effects the plenty, and some of the gore is top notch. There is a scene involving a car accident that has a beheading that would make the crew on "Twilight Zone:The Movie" cringe.

This is not a perfect movie. There are flaws and parts that are a bit off, but for being a sequel in a series over twenty years old it stands up surprisingly well. The kills are fun, the music is great, and if you're a fan of the series there are plenty of moments that will remind you of the previous entries, as well as tie up the entire series.

One last word of advice. Stay through the credits. You will be glad you did.