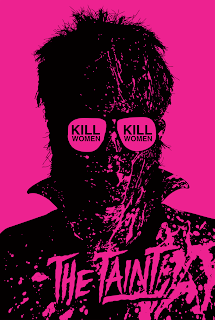 After watching this film five times so far I finally feel ready to attempt to write about it. The Taint is in league of its own. I imagine the filmmakers grew up watching everything from John Waters to Troma. It is sexually charged yet still full of gore and basically gives you a facial of awesome the entire time you watch it.
The plot is simple. The water is tainted(yeah I assumed the title was speaking of the in between of your ass and balls as well) and turns dudes into giant dicked zombies who hate woman and spray everyone with their knuckle children. The gore in this is so fucking awesome, so many head smashing's, clever gore gags and there is more cumming of blood than Cannibal Corpse has on their box set. Oh did I mention dick explosions. Yeah I am pretty sure they got Michael Bay to guest direct all the dick explosions scenes.
The music is just as much of a character as any of the actors.   Goblin meets Kraftwerk and they gang bang Tristeza. Speaking of the actors they all do amazing work. May not be your typical Daniel Day Lewis but for what they are trying to accomplish they pull it off like a baby's diaper in the Vatican.  Speaking of baby's don't miss the assisted aborticide that would make Casey Anthony jealous.
In the end The Taint is a perfect example of what you can do on a limited budget. You can tell everyone is having a blast while they made this and in an unlikely turn you the viewer also have a blast, albeit a blast to the face a blast none the less. Put on your dancing shoes, pull out your plastic sheet  and let The Taint blow its load of awesome right in your face.


Tromeric
Posted by Guts and Grog Reviews at 12:45 PM

NNNNOOOOOO!!!! SHE WAS SO HOT!

hahahahaha The Taint is amazing. I like watching it facing AWAY from the TV when introducing it to new people just to see their faces. It's such a fucking awesome movie.

I really wish I would've bought the VHS when they were selling it. I fucking missed out.

They are still on sale on their site? I think you can still get it!!!