Coons! Night of the Bandits of the Night- Travis Irvine 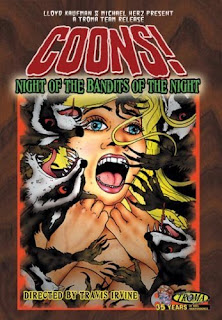 Troma is a company I have been watching since I was dick high. USA up all night introduced me to many of the classics and my VHS scores of The Toxic Avenger and Class of Nuke em High were watched more than my copy of Ramboner, and that's saying something. When I found Cannibal the Musical that fateful day I could not stop watching it. When DVDs started making their way into my house in the late 90's early oughts Troma was a label I would look for right along side Criterion, Anchor Bay, and Something Weird. Terror Firmer, The Tox Box, Tromas War were a few of the first ones I remember picking up, at one point I considered buying the complete Troma catalog off their website. Then something happened, I bought Rockabilly Vampire. There I said it. This was a very traumatic day in my life, I remember it like it was yesterday. I got back to the dungeon of doom, cracked open my 40 lit a smoke and put in what I assumed was gonna be my new favorite film. I waited and waited for something amazing and as time went on I realized I was being tortured. The Iron Maiden doesn't have shit on Rockabilly Vampire. I am pretty sure Werner Hezog should of made a movie about this instead of Dieter Dengler. I don't wanna take away the impact of his torture but he never watched Rockabilly Vampire as far as I know. I realized that while if it had Lloyd' s name on the director line I could count on it to rule my balls but just having the Troma label meant nothing anymore. Buying a Troma movie became like having sex on the bed your were raped on, sure there were exceptions. Teenage Catgirls in Heat, Redneck Zombies, Monster in the Closet but most of the time I ended up watching some Bullshit like Butt Crack that scared me for life. I am rambling, let me get to the point. Coons! Night of the Bandits of the Night is  far better than it has any right to be.
Some may say that Coons is sophomoric and tasteless. Well I can't argue with that. I will say for a movie made with a budget comparable to a German skat film and some of the worst acting and costumes and effects you will ever see its not half bad.  I am not saying this is the new Citizen Kane by any means but it does have racoons that shoot guns, make your mom jokes and throw shit at people. The racoons are just really old victims of taxidermy on a stick but they are fucking hilarious. The characters are all insanely over the top and poorly executed yet you can't help but enjoy it. The writing is surprisingly fun albeit not what many would describe as "good."
You probably should have a lot of drinks if you watch this. You should probably avoid this is you don't tend to enjoy wallowing around in your own shit. If like me you sometimes don't mind rolling around in last nights tequila and stir fry pick up this little turd nugget and launch that shit straight in your DVD player.

Well...this friday is off to a good start.

I need to see smart mouth coons whippin shit at people. It's going to be amazingly terrible. I can't wait! Thank you for introducing it to me!