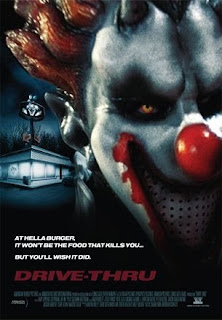 Nightmare on elm street Played roofie roulette with Commando, Good Burger, Killer Klowns from Outer space and Predator. Good Burger ended up with the cup of Flunitrazepam cocktail, while passed out NOES called up its Bro Happy Birthday to me and after stopping at the store for some Natty Ice ad a game cube he showed up at the house that dead built and after throwing a couple back went to give good burger a good ol fashion bro-rape, luckily for Good Burger Predator is an advocate against bro-rape and lasers HBTM. NOES now uses the power-glove to pause Predator, once paused NOES sets up HBTM in preparation of the munging. He pulls Killer Klown over sets in front of HBTM's exit wounds and does a peoples elbow and just covers killer klown in the most mung you can imagine, its a lot. Killer Klown is turned on and grabs commando and and gives him the reach around of a lifetime, he then gives himself a clown frown. I think that was the creative process behind this above average slasher fare.

Tromeric
Posted by Guts and Grog Reviews at 5:22 AM