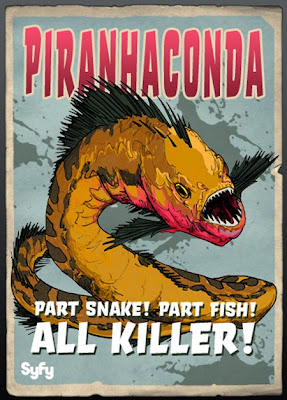 I love creature films. I always have and I always will. I am a bit to young to have enjoyed the heyday when they were always at the drive in but even as a kid in the eighties I would get some thanks to horror hosts and VHS. I loved all the atomic era films even if I didn't live through them. In the last few years we have gotten a slew of them thanks to companies like The Maneater Series, The Asylum and Roger Corman getting back in the game. These are shclock. You don't watch them expecting to be changed, you watch them because you want to have fun. I know 2 Headed Shark Attack didn't change the face of cinema. You know what it did do? Gave me a huge nerd boner and made my day better. Is that so wrong?
Piranhaconda, like Sharktopus starts out with an amazing theme song. This time it is a rockabilly song with the voice of an angel basically telling us what we are in store for, as if we didn't know. We meet up with Michael Madsen who is looking for eggs with his team. They quickly get the shit eaten out of them, hell the Piranhaconda even takes down a helicopter.  My question is why did the pilot think he could get away from a monster in a helicopter? Hasn't he seen Lake Placid or Mega Shark? They love to eat flying food.  I just want to point out that this is at four minutes  and fifteen seconds. Yeah! You get to meet the monster before the five minute mark and it devastates people. Thank you Mr. Wynorski for giving the people what they want. We then meet up with the rest of the bunch they are making a movie called Head Chopper which from what I can tell might be a sequel To Carnage: The Legend of Quiltface. A movie that I would love to see within a movie I am loving to see. Today is awesome. Well quickly some of the crew becomes fish snake.  food. Now that we have gotten some action it is time to bring some more story in. To accomplish this Michael Madsen gets kidnapped and the movie crew joins him soon after. Now Piranhaconda can really fuck some shit up.
This movie delivers exactly what you want in a movie called Piranhaconda. The pissed off snake eats the shit out of so many people leaving nothing but limbs flooding the beach. The characters are all pretty entertaining  and the dialogue is pretty quick witted. You have all the classics. The airhead actress with a rocking bod, the smart unattainable final girl and the stud who happens to be the stuntman that plays Head Chopper and let me tell you he would make Steve Railsback jealous with his skills. The bad guys are pretty cliche but that is OK. They are just food for the snake.
In the end like most of these you now whether you are interested in seeing it. I for one am usually happy with these and add a name like Wynorski and it pretty much means excellence. This guy continues to roll out fun and entertaining films for us to enjoy in spite of the whiny critics who can't figure out he knows what he is doing. It is not that he is incapable of making a "great film" it is that he doesn't give a shit and he just wants us to have fun on a Saturday night.


Tromeric
Posted by Guts and Grog Reviews at 6:24 PM

I haven't seen it yet but I want to watch Sharktopus before I do anyway. I like the Busty Cops films so as long as there are women with huge Wy-NORKS-skis in it then it'll be great.