Crypticon 2012 or: My Last Horror Con Before John Cusack Saves Me In His Limo

Growing up I would always see adds in Fango for different conventions full of actors and directors that I would gladly give HJs to if I had the chance. I dreamed of going to one the same way Andy Dufresne dreamed of his freedom from Shawhank.  The problem was I was in Washington State and all the adds were for East Coast or occasionally LA.  I had no way of making it and it killed my insides. Through the years I made it to a couple Comicons and even a Couple Twin Peaks Fests that made my nerd boner twitch like a madman.  I went to a tiny Comicon here in Portland before I moved here that Brinke Stevens was at and that was amazing. At the time it felt like it might be the closest I would ever get to a real horror con. Well jump ahead a couple years and I heard that there was going to be one in Seattle. That was only two hours away from me at the time. My pants were more full of shit than your unwanted child. I along with Gabe Nye, Jacob Von Klingele, and the Keith Innitive went and nerded out like Bobby Carradine. It was amazing. I felt at home. Great people, so much shit to buy and drinks and fun that I can't even explain. Jump ahead to the next year I had just moved to Portland. I made the trip but I was lower on cash than MC Hammer. It was fun but not quite the same. Over the next couple years responsibility and obligations got the best of me and I missed the third and fourth year. Well I am glad to say that this year I said fuck everything and just did it. I took a week off work, bought a train ticket to Seattle, booked a room in a hotel way nicer than I had any business being in and stroked my nerd boner in a path of chaos and nerdgasm.

So because life is an evil bitch I got insanely sick right before I left for the con. I spent the day before I left in bed watching horror films on so much NyQuil that my liver was begging for my normal abuse. I got up Thursday and went to work then came home got shit ready and Peter Poison took me to the train station. The train was more packed than a 711 on welfare day.  I met some good folks which made for a fun trip outside of feeling like death.  I arrived in Seattle pretty much three hours later and Jacob Von Klingele picked me up and we headed back to his place. A couple hours of catching up and checking out his progress on what will be one of the grog's most amazing contests yet. I may as well let it slip here. Soon you will have the chance to win a custom Dear God No! action figure set and let me tell you your shit will be rock hard. Well back to the point. We nerded then I attempted to sleep but being as I assumed I could sleep in his son's bed which was two twin mattresses  surrounded by cartoon VHS and a Sharktopus figure. Needless to say sleep didn't really happen.

The next day I hung out with Jacob Von Klingle's own mistress of the dark Alisha Von Klingele. I took her to get a burger and coffee to thank her for letting me take over her lair. She then dropped me off at the Hilton and I checked in and fought the urge to lay down on the much more fitting bed for me they offered.

Cody(Sadistik) and his bad ass girl showed up and we lounged around learning about Songs in the key of Murder which was up to like seven views after their Fango add. We then headed down to the con and were of course given a very warm welcome and headed into the real version of Heaven. Right away I see Doug Bradley, Danielle Harris, Dee Wallace, Marilyn Burns, Richard Kiel, Don Coscarelli along with tons of other horror icons. We walk around some more and I am overflowing with shit I want to buy. Movies, books, art, posters, toys, and pretty much anything you can think of. We just wandered around and took it in. Cody hit up Marilyn Burns who you might know as the bad ass final girl from the best horror film ever made The Texas Chainsaw Massacre.

We then went and talked to Pinhead himself, Doug Bradley. He had such sights to show us. He was a true gentlemen and with his soft spoken British accent answered our questions signed our swag and gave no indication he wanted to rip our flesh off with the Lament Configuration. We spent some money, had some fun, met some badasses and ran into old friends. It was a great start but sleep dep and starvation was starting to win so we headed down the road to hit up 13 coins for some late night grub. Cody and Alexis left as he had to fly out to Minnesota for a show the next morning and I felt like I was in Jacobs Ladder. I layed down in probably the best bed I have ever slept in and found that they were playing the shitty Pumpkinhead sequel that Doug Bradley was in so I put it on and passed out like a girl at a frat party.

The next morning I woke up, walked the like five hundred feet to the Starbucks down the hall got a coffee and sat out in the smoking area drinking my breakfast waiting for Jacob Von Klingele.  He arrived and we got right on it. We wandered the halls talking and spending. We spent lots of time at our new friend Reuben Splatterbeast's table. This guy makes some of the best art for a horror nerd you can even fathom. I could of easily spent all of my cash at his table. Horror and metal all done in a way that will definitely piss your mom off, unless of course your mom is as cool as mine. She's not!

I ended up getting a severed hand painted like Henry: Portrait of  a Serial Killer, A Coffin Joe Candle and a ton of prints that make my house way more bad ass than yours.   I also ended up running into an old friend that has for years now covered my ass with threads that would make Tangerine from Garbage Pail Kids jealous. Lix Online.  I got a bad ass Video Dead shirt as did Jacob Von Klingele. The Kieth Initiative and Sadistik hooked up her beautiful Torso shirt. Wow! 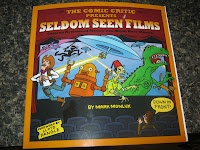 While checking out all the great shit I met The Comic Critic Mark Monlux who I had the pleasure to talk to and  bought his book while I was at it. He said he would draw me into a movie. I of course first asked for C.H.U.D. II which he hadn't seen, I then went for Ghoulies 3: Ghoulies Go To College which was also a bust. I finally met him at Troll II which he was able to draw me into by memory alone. I highly recommend checking him out. Reviews less drunk then mine but full of humor and spoiler free.

The rest of the day was full of talking to other badasses of horror. Dee Wallace who had so many posters and prints I wanted. I ended up going with the Popcorn print as, well Popcorn owns my soul. I went and talked to Marilyn Burns some more as well as Don Coscarelli and  the surprise highlight of the con Robert Jayne who you might remember as Melvin from Tremors as well as one of my favorite sequels this side of Troll, Night of the Demons 2. Don Coscarelli remembered me from three years ago which was insanely impressive but at the same time he is such a genuine dude it kind of makes sense. We went and watched his Q and A and spent a while talking to him after. The Keith Initiative got a Phantasm II poster which Don graciously signed  with his memories of dinner. I think there may be some shenanigans going on with this story but regardless it is a great moment in history.

Now back to the man, the myth. Robert Jayne. I had so much fun talking to this mad man. I don't think he did very many cons as he seemed to be surprised how much people like Night of the Demons 2 as well as feeling guilty about charging for an autographed picture. We all stood around talking to him for a while about everything from movies he had done with other guests there such as Cerrina Vincent and  Dee Wallace to how Joey Lawrence had been all growed up and went by Joe now. While talking to "Melvin" we found out he was there working with Vern Fonk. Being that I am a Portland kid and not a Seattle kid I had no idea who that was when he announced it. Quickly Jacob Von Klingele and The Keith Initiative were like " I love Vern Fonk. Honk for Fonk." at which point he turned around in slow-mo. It was priceless. I have since checked into him and let me tell you if I lived in Seattle I would definitely get my insurance from the Fonk. Check out one of many awesome commercials I found. Yeah. You know you want to get insurance from him.

After the day of awesome we headed down the road to get some food and decided we were gonna go by 7-11 to get some snacks so we could just relax and watch some movies in the room. I was beyond exhausted by this point. While walking to the store a beam from heaven shined down and low and behold there was a liquor store that was still open. We hit it up and headed back to the room for some much needed relaxing and bullshiting time. Kicked the old Ipod on random and put down a fifth of Evan. It was like heaven but real.

In the end Crypticon was more of a blast than your mom felt on prom night. It may not be the biggest con but for us kids on the West Coast it has a  special place in our heart and is given more love by the organizers than the alter boy is given at St. Josephs.

As long as John Cusack does his job I will see everyone in 2013.

Hell yeah man, sounds like you had a killer time at your first con just like I did this year. I really need one of those Coffin Joe candles, but what I need more is...A FUCKING DEAR GOD NO ACTION FIGURE SET!!! Holy shit that's bad ass.

I'm jealous, of course. That must have been one hell of a good time.

Yeah. I just put two and two together. So random, or Randumb?