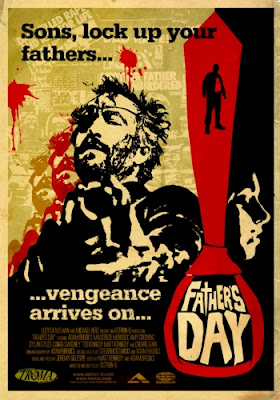 Father's Day is one of those rare films that is about as hard to explain as pro-life is to a rape victim. So much happens in these hundred minutes that I am pretty sure Astron 6 just filled a baby up with ideas, ran it over with a semi, rolled it into a little baby ball and fed it to the manatees that write Family Guy.
Basic idea of Father's Day is that there is a dude who kind of looks like the Dr. from Human Centipede two raping, disemboweling and killing Fathers, and not necessarily in that order. A team assembles that includes a one eyed bad ass, a priest and David Arquette's  character from that Lukas Haas movie. Strippers, rapists, dirty cops, angels, demons(no Tom Hanks, thank god), and Lloyd Kaufman are just some of the obstacles they will have on their epic journey.
Over the last few years there has been a kind of grindhouse resurgence and as with most things it has felt the kind of overkill that Sharon Tate's baby felt in 69. I am happy to say that Father's Day is one of the stand out's and like Dear God No! and Hobo with a Shotgun has a lot more going for it than just a gimmick. Father's Day stands on its own like a cripple in space even when listed next to those films.  It takes every convention set and stabs it in the butt hole in slow mo while a killer guitar riff is strummed.  Every time I thought I saw where it was going it would punch me in the dick and say "not this way fucker" which I admit is a strange thing for a movie to do.
All rambling aside when Father's Day hits your city or any city you can drive to, Go! Father's Day is offensive, surreal, hilarious, sexy, over the top, ridiculous, insane, full of amazing music and characters, brilliant, full of some of the most creative special effects and set designs, and it will have you asking your dad to play with your insides  while they're on your outside.


Tromeric
Posted by Guts and Grog Reviews at 8:16 PM