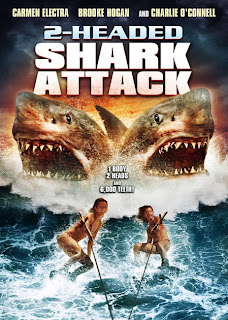 Anyone who follows my nonsense knows that I am unashamedly obsessed with creature movies of all kinds and the badder the better. I am pretty sure I have some kind of split personality disorder as I love both sides of the spectrum when it comes to film, and I mean that in a severe way. One day I will watch David Lynch, Terence Malick and Luis Bunuel then the next switch to anything with The Asylum, Full Moon or Maneater logo on it. I am a glutton when it comes to film, and booze and drugs and music and well you get the point. Well today I woke up and went on a hunt. I was like Jeffery Dahmer  looking for a little boy. I started in one corner and worked my way through. 2 Headed Shark Attack was nowhere to be found. I wiped the tears from my eyes and gave in and just rented it. I luckily live Portland where I can go to the store where coincidentally the writer works and rent this bad boy. It's not the same. It's like when you call for a hooker from Craigslist and think you are getting the one in the picture and Edith Massey shows up(actually if Edith Massey showed up I would do unspeakable things to her while she talked to me about eggs), it's still sweet but not quite the same. Well I guess it was fate as when I got home with my rented copy in hand I found out I randomly won a copy from The Asylum. Now with all this excitement it was time to put this bad boy in. So what are the results?
2 headed shark is a no bullshit movie, or an all bullshit movie I guess depending on how you look at it. It starts right of the bat with some dickbag kids getting the shit killed out of them. We then meet a group of students on a boat, said 2 headed shark fucks up their boat so they go to an island. Well it's not really an island but that is besides the point. Gabe Nye can explain the difference to you. I don't give a shit. Sound kind of familiar? Well it is and that is the fucking point.  This is where you decide if you are gonna like this movie. Are you going to argue logic, originality and quality? If so why the fuck are you watching an asylum movie. These guys know what they are doing. They are possibly the smartest filmmakers out there. There is a time for art and there is a time to just have a good time. Do you fall in love with everyone you sleep with? If so you probably fell for that super long joke all those one syllable dudes in sandals wrote and you are probably too busy watching Bibleman with Buddy to watch awesome movies like this anyways.   OK, I am ranting as I am sleep deprived, less then sober and well it's what I do. What I am trying to say is you know by the name and cover if this is something you would be interested. No one is going to pick it up and think it is based off of the work of Francis Bacon.
I will just get to the point. I loved 2 Headed Shark Attack. I love Shark movies and my math is tight enough to know that two is better than one. Most of the characters are insanely stereotyped, Carmen Electra is a Dr. and the Shark either looks like the Jaws NES game or the Lobster from Multiple Maniacs. I say all of these things in highest regard for everyone involved. This movie is self aware, sure in a different way then something like Scream but more in like an Expendables way. They give you everything you could possibly want in a film about a two headed shark. The kills are all fun as hell and will probably make you spit beer everywhere. My one complaint is that this shark is kind of a prude. One thing I have learned in all my years of creature film watching is that while being evil they still will stop unspeakable acts, for instance crocodiles and alligators always stop rape. They have some built in rape sensor that works better than their eyes. I assume Gabe Nye could explain the science behind this so I will have to get back to you on that, but I promise you it is true. Well what I learned today is that two headed sharks hate threesomes. This also leads me to believe that they are the true dicks of the ocean. You don't interrupt a three way.

Tromeric
Posted by Guts and Grog Reviews at 11:53 PM

"some dickbag kids getting the shit killed out of them"

I'm going to probably inadvertantly steal this line. It's so epic! HAHAHA

I knew ever since they said "2-Headed Shark Attack" that I would love this movie. Haven't seen it yet but I already love it. Can't wait to see it!

I can't wait for this one to end up on Watch Instantly, it looks like a lot of fun.