Time to look back on the year in toys.  It’s been a pretty slow year for horror collectibles, but any horror  toys are good horror toys.  All in all the amount of action figures not based on a summer blockbuster of some kind or a video game is shrinking pretty quickly.  There are a lot of different reasons, money being being chief among them, but there’s also a lack of  good horror movies coming out that lend themselves to figures.   There have been some great movies, but they lack the mainstream appeal to warrant figures.  Which is too bad because I would straight up murder some orphans for a Hobo with a Shotgun figure or maybe The Taint.  Really I just want an action figure with a raging boner. On the upside this means they are going back to the well and bringing some classics back to figure form with updated sculpts and articulation and even re-releasing some older figures that were tough to find when they were originally released.   Well enough of me bitching, on to the list.

Few things go better with Horror movies than metal.  It’s like chocolate and peanut butter, but with more blood and lightning.  Eddie is the perfect mix of these two flavors and Neca did him justice.  There are a couple re-releases in the assortment, but the new figures make up for it,  The New Frontier figure is a perfect example of NECA’s new blend of sculpt and , but the killers figure is the real money shot.  The paint and sculpt work together to make it look like he stepped right off the record cover.

Here’s a perfect example of going back to an old property for new figures.  Now I’ll go on record as not being a very big fan of the Munsters, it’s all about The Addams Family,  and that’s part of the reason they’re lower down the list than they maybe should be.  All of the figures in  the series are nice, but I had to go with Grandpa for the accessories.  He comes with his lab equipment and it‘s great stuff.  It’s becoming more and more rare that you see this. As the cost of production go up these kind of things are the first to go, luckily that’s not the case here and it‘s the perfect compliment to the top notch sculpts and decent paint work. 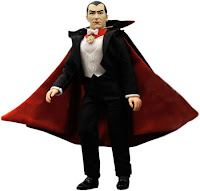 Your opinion of these figures will vary greatly depending on what you think of Mego figures.  Mego is the grandfather of companies like NECA, Mezco, and even Hasbro.  They brought figures to the market that had never been seen before and dominated the action figure world until a little toy line for some space movie came out in the late 70’s and changed the game and took Mego down.  These retro figures do a great job of keeping the feel of the old figures while updating them with better head sculpts and better soft goods.  They have some cool properties out there, but for our horror purposes The Real Ghostbusters and Universal Monsters are where it’s at.  The Dracula in this line is great, he just screams “Bleh” right from the package and that’s what I love about these figures, they’re just cheesy enough to be fun. 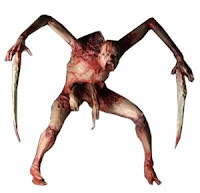 One of the biggest outlets for new horror material is video games and the toys they spawn.  Easily my favorite horror game of the last few years are the two Dead Space games.  They scare the shit out of me in the best way possible, but that’s for a different list.  We’re here to look at the toys and the Necromorph is beautiful.  I can remember back in the hey day of McFarlane figures and how much I loved walking in to Toys R Us and seeing  a mutilated corpse suspended by hooks in his face with a deformed fetus bulging out of his crotch (god bless you Clive Barker) hanging in the same aisle as the
Power Ranger and Pokemon toys and this figure brings me right back there.  He’s gory as hell and they don’t hide it, plus you have a fantastic sculpt and paint and you have a winner.  The new Isaac figure is great as well and kind of a must to keep your toy shelf safe from these monsters. 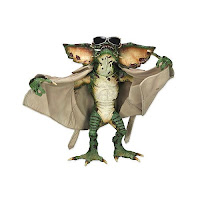 This isn’t the first time NECA has produced Gremlins figures, but it’s certainly the best so far.  They have a series of three Mogwai and three Gremlins, so far,  all with improved sculpts, paint and articulation (the Mogwai have poseable eyes!).  Plus they’re smaller figures with a smaller price tags which lends itself to having a bunch of them all over your shelf.  The best of the bunch so far is the flasher.  Really it’s just because he’s always been one of my favorites from the movie and it was the only way to chose from a batch of really solid figures.

I feel like a huge ass for not picking theses figures up right away.  I’ve always wanted solid figures of the Universal Monsters and these are the best to date.  All around the sculpt and paint are fantastic and the online versions come with some great bases and accessories.  I chose The Bride for this because it’s nice to finally have a figure of her and what a great figure to start with.  She has a really solid face sculpt, with some great attention to detail (love the hair) and good paint.  Although I have seen some that were a little sloppy, so look for that.  Add all this to a simple, but effective base and you have a win in my book. 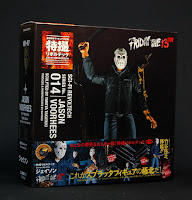 Normally I’d stick to non import figures for this list, but I can’t help it.  This figure is just plain awesome.  If you’re familiar with the Revoltech figures that should be enough to get you excited for this figure.  If you’re not, than my friend you are in for a treat.  These are series of Japanese figures that have been predominantly based on anime, but they have been branching out as of late with offerings like this one and the xenomorph from Alien.  The figures are know for their ridiculous amounts of articulation and yet they manage to stick to the look of the source material.  That’s what makes this Jason so amazing.  He’s more articulated than you’d ever need and the sculpt is perfect for a 5 inch figure.  Add in the fact that he’s loaded with different weapons, a great barn base, and one of the best severed head accessories I’ve ever seen and you can see why he’s on this list.

You’d think after getting roughly four hundred thousand different Freddy figures I just wouldn’t care anymore, but here we are.  NECA went back to the well and gave us the best versions of  our favorite child killer.  They seem to be going through making basic, but perfect representations of Freddy from every movie.  My favorite so far is straight up classic Freddy.  The attention to detail is obvious, you can tell what movie he’s from even without his awesome elongated arms.  From the lack of stripes on his sleeves to the dead on face sculpt this figure really shows why NECA remains the go to company for affordable movie collectibles that look great on the shelf.

McFarlane is back!  It felt so good to care about a McFarlane figure again, and a horror figure no less.  His figures throughout the 90’s are the reason I still collect toys today. Now, whatever your feelings are on the show or the current state of zombie over saturation there’s no denying that this comic is one of the best to come around in a hell of a long time and there’s no one I’d rather see make figures for it than McFarlane.  He uses his 5-6 inch scale that he uses for the Halo figures and manages to pack more detail into them than some full size NECA figures.  Sharp sculpts, clean paint, and even some creative articulation make this a really solid figure.  It was tough to pick Rick over the zombies in the line and they’re great as well.  McFarlane even throws in some great play features on the zombies like an exploding head and pull apart action that easily makes them worth buying.  Plus what good is Rick if he doesn’t have a zombie skull to embed his axe in. 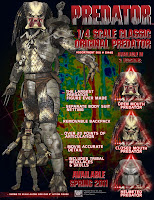 This feels a little redundant since my last list ended with a huge amazing NECA Alien figure, but I can’t help it.  This thing is a work of art in every sense of the word.  NECA has really done great things with the Predator line mixing new and old with great figures, but this thing is in a league of it’s own (insert shitty movie reference here).  The sculpt is one of the most detailed that NECA has produced to date, with paint apps to match.  Not to mention some soft goods and multiple versions (masked and unmasked) and I want this figure more than anything in the world. This is another case of NECA going to bat for hardcore collectors and doing everything they can to bring out a figure that doesn’t make any financial sense to release like they did with the Alien or the Balrog from a few years back.  In my book this makes NECA a hell of company and I’ll always keep an eye on what they’re doing even if they are producing fewer and fewer horror figures.

Well there you have it.  Even in a light year there’s still some great figures out there.  Here’s hoping next year brings even more figures and some good movies to inspire them.

Jacob Von Klingele(Check out his page of Customs)
Posted by Guts and Grog Reviews at 9:46 AM