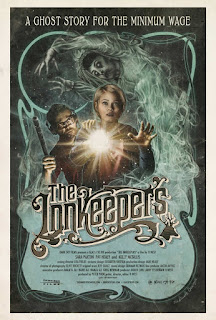 Haunted House or ghost films are generally not my favorite sub genre when it comes to horror. Overall I find them boring, predictable and cheap. Exceptions of course would be classics such as Poltergeist, stylistic modern gems like The Others or over the top awesome, fun fangasm giving movies like A Haunting in Salem. Well Ti West has added another one to my list. The Innkeepers, a film I have been waiting all year to see and finally got my chance just in time to use it for my year end list.
The Innkeepers follows two Innkeepers(shocking right?) who are working the last weekend of a hotels existence. There are not a lot of characters in this. You have the cute girl next door and your every nerd filled out by a creepy old man, an irritating mother and son combo, a new age washed up actress and some ghosts. The nerd runs a site following haunted happenings in the hotel which she helps him out with from time to time. Since it's the last weekend they are just staying in house all weekend.  They take turns recording EVP, looking at porn, and getting drunk. That is as much of a plot as you will get from me.  I even feel that may be to much.
The Innkeepers like most of West's other work is about as slow burning and tension filled as fucking an eighty year old corpse. Let me stop for a second. I mean an awesome super hot eighty year old corpse, like Rue McClanahan and this is coming from a Rue McClanifan.  What I am trying to say masked somewhere in this bottle of vodka is The Innkeepers albeit slow is fun, exciting, smart and worth it.  It sucks you in like a vacuum in an abortion office and doesn't let go till you're on a poster in front of a planned parenthood.

Tromeric
Posted by Guts and Grog Reviews at 10:10 PM

Have you ever seen the Roddy McDowall haunted house movie Legend of Hell House?

Sadly, just couldn't get into the movie.
The first third was brilliant, the second third was pretty tiresome and boring, and the last third just disappointed me.

@Chris I don't think so. @Maynard It may of just been the setting/time/level of drunk but it just worked for me. I still think I like House of the Devil more but I will need to watch this more before I am sure.

Good review, I got to see it this past weekend finally, and loved it. I'm with you though, I think I liked HotD more, but not by much.