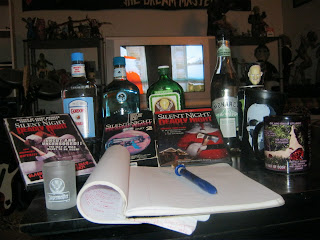 So after a night of debauchery with many of the Grog's contributors which included lots of booze, gift exchanges, wandering of the streets of Portland, multiple bars and strip clubs and just all around family fun I slept for a few hours, got up and started an epic journey.  It seemed right. It is only a couple of weeks away from Christmas, and even though I am seeing Silent Night, Deadly Night in all its 35mm glory next week, I wanted to sit down and watch all five of them in a row with nothing but a couple bottles of booze, a notebook and my sanity. I was curious which of those I would have left when it was over. Well I am proud to say pretty much the notebook is all that made it out, and that is just further proof of me losing my sanity. I sit here the next day at the crack of noon with a notebook that supposedly has reviews of all five films. I am getting out my decoder ring and trying to decipher this long lost language I created. 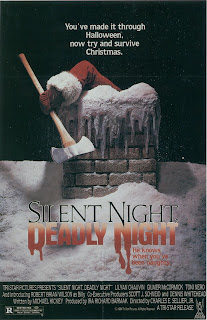 A family goes to see their Grandpa who gives grandpa from Troll 2 a run for his money in the crazy department. When he gets Billy alone he scares the shit out of him. They then leave and see a stranded Santa on the side of the road. Thinking they will win parents of the year award they stop so the kids can meet Santa early. They have instead signed their death warrants and created a couple of monsters. This Santa brings rape and murder and we have him to thank for the next ten hours of my life.
We now jump ahead and Billy and his brother Ricky are just hanging out being orphans with a bunch of boring ass crazy nuns.  Billy draws a sweet picture of a reindeer getting decapitated that mirrors many of the pictures I drew back in elementary that got a call home to my mom about my stability. Well since they don't have a phone that reaches six feet under they just punish him. He then catches some teens having some pretty awesome Catholic guilt sex. The mega bitch nun now whips him in a scene that has turned on pedophiles for years.  We now jump ahead again and Billy is all grown up. He gets a job at a toy store.  Everything seems fine until they ask him to be Santa and he thinks about it and is like "I am insanely afraid of Santa, he killed my parents while I watched and I wake up screaming from night terrors dealing with it every night, sure I'll be Santa, why not?" Well maybe he didn't actually say this, but it was implied.  We are now where we want to be. The reason you go to see Silent Night, Deadly Night is to see a madman dressed like Santa punish and kill innocents. Silent Night delivers. There are some super creative kills, fun campy dialogue and Billy is basically the Bukowski of killer Santas with all his poetry reading.
Silent Night caused quite the controversy when it was released.  Every major critic condemned it, Jesus freaks were disgusted with it and there were more protests at screenings than you would find at a liberal arts college. People take shit way to seriously. Have fun. When I was a kid I watched it and it didn't traumatize me. I loved it. It scared the shit out of me, which is what I was going for so good job. Today when I watch it I have a blast. It is a fun yearly tradition and the house of grog is not complete without a viewing of it.
4/5 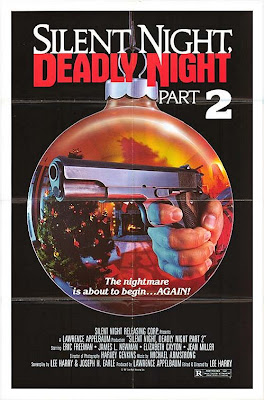 Silent Night two follows Ricky, Billy's younger brother who saw him gunned down after his exploits in the first one. He is in a psych ward learning about his feelings.  Silent Night two is so many flashbacks to the first one it is hard to count it as a separate film. You get moments of Ricky using his eyebrows to tell the story of Billy and other crazy things but it isn't till about forty five minutes in you really get any new footage. With that said. I don't give a shit because part two is god damn amazing.
You get such memorable moments as a redneck trying to rape a girl who takes a break to get a beer. Ricky then runs him over for which the girl thanks him. Finally a intelligent woman in a horror film. She recognizes that Ricky is like every crocodile from any giant creature film and is the rape avenger. She is appreciative and not whiny like " you're crazy! Why would you kill someone that was attacking me? That makes no sense."  Once Ricky gets a gun the fun really begins. He takes out his girlfriend like Bambi's mom because he realizes she's a lying whore. "Garbage Day"  two words that are will forever live in infamy thanks to this movie. If nothing I say convinces you how awesome this is, let me tell you "Garbage Day" will. It is the best line reading in the history of film. The Acadamy owes Eric Freeman an apology for not winning best actor in 1987. That's right, " Fuck you Paul Newman" The Color of not garbage day is more like it. It comes to its finale with Ricky vs the nun that looks like Seal. Now that is a fight I would pay to see, and have many times.
4/5 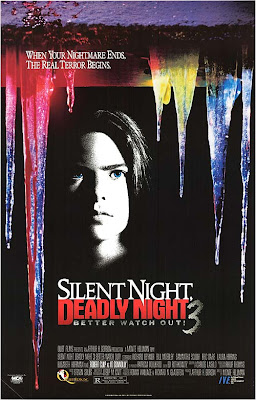 I always remembered liking three the most outside of the first two but after revisiting them all back to back I feel I was wrong. Monte Hellman takes the reigns for this and is the first one to take the Christmas theme out, it is there in the background and used as a backdrop but overall it is a paranormal slasher.  Ricky who is in a coma after the events of two is being treated by Benjamin Horne himself, Richard Beymer. He has a patient who is the world champion of blind orphans, he realizes she can get into Ricky's dreams and thinks he can somehow fix Ricky.  This of course goes all wrong when Ricky wakes up and starts stalking her. He gets a ride to her grandmas house with some dude who doesn't think it's weird that he is in a robe and looks like the bad guy from Teenage Mutant Ninja Turtles. She is there with her brother who is played by another Twin Peaks alum Eric Da Re who looks like the result of Kenny G joining W.A.S.P.

It has moments of fun, and some cool shots which I am sure Monte had a lot to do with. You get more flashbacks in case you didn't get enough in part two and the cast is pretty rad with all the Twin Peaks faces, as well as another Lynch lady Laura Harring who shows off her boobies before science fucked em up.  Bill Moseley gets the part of Ricky which is quite different from the other two psychos he is known for as Ricky hardly speaks as he is half a retard with a glass cage for a head.  In the end it is pretty forgettable but for the completest like me it is a must own. 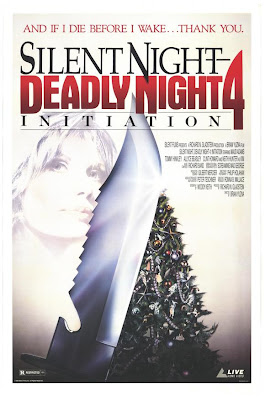 Brian Yuzna came along and was like "yeah I'll make SNDN4 but instead of Christmas I am gonna fill it with bugs and witches."  (*may not be an accurate quote)
A lady jumps off a building while being on fire. Clint Howard(who plays Ricky, not sure how that works) finds a burger with no cheese. He is pissed. A newspaper worker decides she wants to be a real reporter so she investigates and ends up getting sucked into a world where the cast of The View  chases her down, gives her an insect facial and invites The Applegates over. Her vagina pukes and she is transformed into a combination of Belial and Grant Grant.
This gets a lot of hate and I don't get it. It is nothing like the other films. It can't be compared to the other films. It is full of slimy, splattery awesome that only Yuzna can bring.  The score is done by Full Moon favorite Richard Band and it is full of "surrealistic visual effects" by Screaming Mad George.  When I saw that credit I must admit I chuckled but after finishing the film it works and I can totally get behind it. Like Brad Pitt did for Gwyneth Paltrow get your head out of the box and enjoy this.
3.5/5 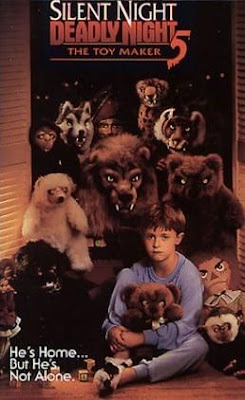 The final entry brings us Mickey Rooney who was very vocal of his distaste for the first one as a toymaker who runs a shop called Pettos's. His name is Joe so I guess it is suppose to be clever, to me it is the complete opposite of what you should call a store for children unless your store is in the back of a windowless van. Mickey Rooney looks like the left side of a ball sack anyways so what does he know? I will tell you something he knows and that is how to make toys even cooler than they already are.  The surrealistic visual effects are back in full force and Yuzna steps down as director and just sticks to producing this time.
SNDN5 opens with a very Lynchian slow mo shot of a kid watching his dad get killed by a bad ass evil Santa that he found on his doorstep. We then jump ahead a bit and the kid doesn't talk and is not so stoked on Christmas. I don't get it. He sees a commercial for the toy that killed his dad and freaks out. Get over it dude. I don't throw a hissy every time I see Maximum Overdrive.  The next seventy minutes or so are filled with plenty of awesome.  Toys that shoot, a real life Leech Woman, Roller Blades that kill you(which they should), fake arms that will finger your butt hole like the one that got away a giant size Ken doll trying to rape a lady with his nodick while calling her mom.
The Toymaker is an excellent film that should be watched and not compared to the other SNDN films but set aside in its own world of badassary.
3.5/5

Well I survived. Five films, lots of liquor, and a notebook of what would be memories if I could understand them or remember them.

Tromeric
Posted by Guts and Grog Reviews at 2:49 PM

I'm jealous that you're going to see SNDN in 35mm. That's gonna be so fucking awesome.

Loved the reviews, I agree with all of them. This series is awesome and one hell of a bad ass rollercoaster ride. The ups are just as awesome as the downs. It's a good time.

Part 5 man, that's where its at. HAHAHA mickey rooney.