Can’t Look Away: The Lure of Horror Film- An event overview by Jacob Von Klingele 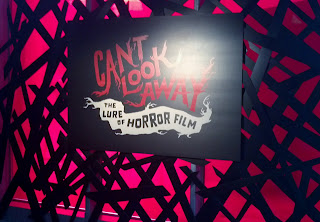 The Experience Music and Science Fiction Museum in Seattle has been running this special horror movie exhibit for the last few months and I finally scraped together enough money to go check it out.  I’ll just get this out of the way right off the bat, it was fucking amazing.  I’ve been to the Sci-Fi museum a couple of times before and it was cool as hell.  Original props from Star Wars, Star Trek, and a whole slew of other stuff, but a lot of it I’ve seen before and obsessive sci-fi collections are nothing new, but how often do you get to see Jack’s actual axe from The Shining?  Hell, how often do you get a whole museum exhibit devoted to the bastard child of cinema?

The exhibit is curated by Eli Roth, Roger Corman, and John Landis.  They have a really stylish display for each film maker that focuses on one of their movies.  The display is done up to look like a model kit with all the pieces still on the sprue with a video playing interviews with them talking about their influences and movies.  The entire middle of the exhibit was sectioned off into different areas to watch some of the usual horror guys, John  Landis, Mick Garris, Eli, and so on, talking about some of the most influential horror movies of all time.  These were pretty great, a little on the light side for the general public that isn’t obsessed with horror movies like we are, but still a fun watch.  Luckily someone behind the scenes must have been reining Eli Roth in a little, he wasn’t his usual cocky, obnoxious self and I’m guessing at this point I don’t need to describe John Landis or Roger Corman to you.  I’m pretty sure at least one of them is in every horror documentary that’s been made in the last 20 years.

Along both sides there were some great displays.  The best being the timeline of 100 horror movies to see before you die.  It was laid out as a timeline with most of the usual movies you’d expect on there and some 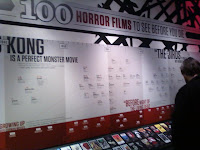 cool quotes.  They didn’t get too obscure, but they were all well worth a watch.  Along the bottom of the timeline they had small movie posters for each movie.  This was my first clue that they had people with some horror nerd cred working on this,  They had a great selection of obscure posters.  Most of these movies have posters you’ve seen a million times, so it was great to see what are almost always the better posters.  Along the opposite wall was a list of  horror creatures with descriptions of their abilities and weaknesses.  These had a really cool style to them, but the info is nothing new for a seasoned horror fan.  Side note, I tried getting pictures of these displays, but they were too large and I couldn’t get far enough back.

The real highlight though, and the thing that gave me an enormous nerd boner, was the props.  There was a great set up with so many amazing things.  They ran from the Monster’s boots and head piece from Abbott 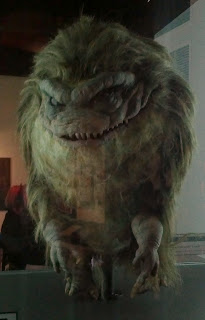 and Costello Meet Frankenstein and the mask from the original Mummy all the way up to the hacksaw from the first Saw movie.  It was so great to get up close with some of the older props, like the mask from The Creature From the Black Lagoon, and really see the craftsmanship that went into them.  Then there are the just straight iconic movie items, like Jack’s axe from The Shinning and the face hugger from Aliens that are just incredible to be in the same room with.  Even the stuff from movies I don’t care for like Constantine and the Buffy TV show were great to see and appreciate the work that goes into them.  The real highlights had to be Jason’s mask and machete from the newest movie, Freddy’s glove from the 5th movie, and the mother fuckin’ Critter, but the best of all the was Xenomorph costume from the first Alien.  Anyone who knows me knows I love the hell out of that movie and H.R. Geiger, so seeing this in person was incredible on a whole new level.  There was almost too much to take in, but hopefully some of the pictures will help.

One of the cooler things about the sci-fi museum in general is just getting to see some incredibly rare items and they don‘t let you down here.  I mean props are one thing, but seeing those one in a million things that you’ll never see again is just incredible.  They have the original script for Night of the Living Dead with a handwritten title page and George Romero’s name on the cover. It’s great to have such an important piece of horror history being preserved.  They also had Guillermo Del Toro’s idea journal.  It’s was amazing to be able to see into his head in a way, especially with someone like him.  There was one thing that just floored me though.  They have the original manuscript for Bram Stoker’s Dracula, with notes and corrections by Bram and his brother.  It was unbelievable.  I don’t even care about vampires and this was like seeing the rough draft for the bible, except with less D&D bullshit.  The manuscript is so old and fragile they only display 3 pages at a time and they have to rotate them out to preserve them.  This kind of priceless stuff is worth the price of admission alone.

There were a few interactive kiosks discussing the music of horror, with a great interactive menu and tons of movie clips.  They went well with the discussions of the important horror films I mentioned earlier.  There were also a couple of interactive things that my kids had fun with were you could get your picture taken screaming and some kind of shadow puppet thing that was pretty cool.

All in all this was an amazing exhibit and I couldn’t recommend in more if you live anywhere in the area and even kind of like horror.  It was well designed, well laid out, and the people involved obviously love horror movies as much as we do.  I was pretty surprised with the amount of violence and gore to.  They had a warning saying it was PG-13 when we were going in, but they had some of the more graphic moments from the movies playing in the clips.  It was nice to see, I was worried they would pull it back too far, but it was a good balance of keeping it accessible to the masses without forgetting that horror should be shocking.

Well, I’m going to go try and get rid of this boner that I’ve had for the last 4 or 5 hours.

***While Jacob is trying to get rid of his boner here are some pictures to get your blood flowing. 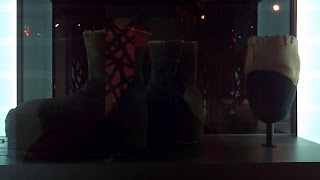 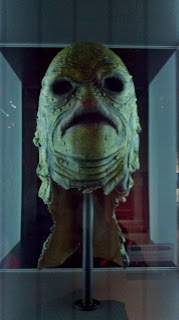 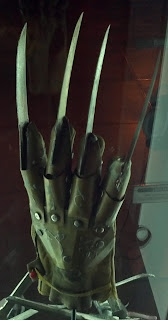 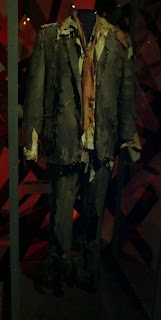 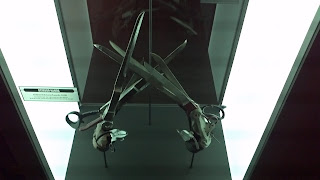 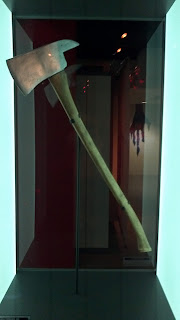 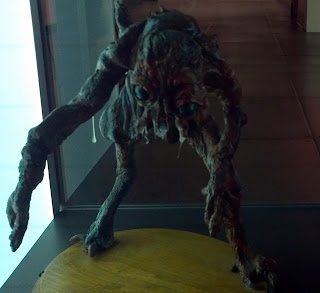 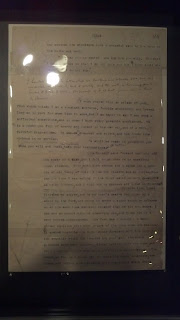 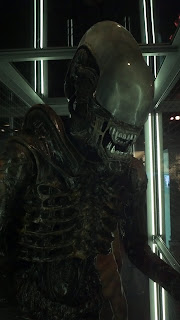 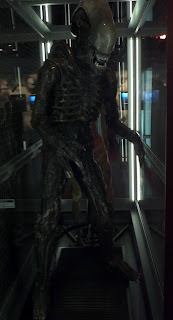 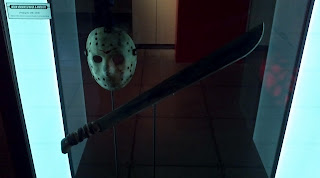 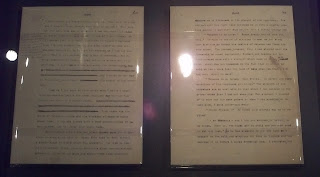 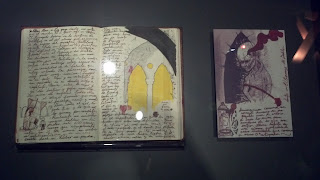 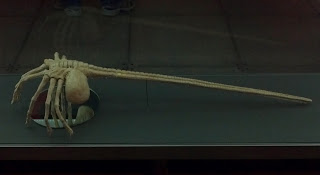 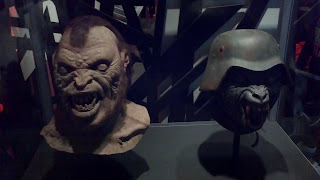 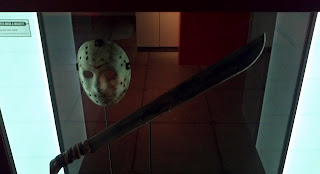 Posted by Guts and Grog Reviews at 7:43 PM

Fuckin' a, I've been debating whether or not to check this out since Oct because I hadn't heard a single bit of buzz, positive or negative, about it. Definitely want to see it now. Those props are killer!

Yeah. I need to make a trip to Seattle anyways. This just adds to it.