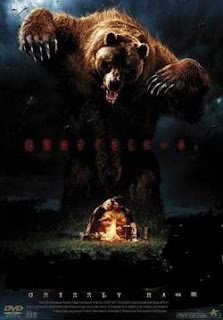 This bear is pissed. I kept waiting for Carrie to show up, but no luck. Four really irritating friends set out for a camping trip. They say really irritating things, and listen to really bad music. They decide to go past the normal spot, cut some chains and trespass. They drive around like a bunch of dick nuggets and kill a grizzly cub. The mom is now more pissed than orca the killer whale, but of course in their dick nugget driving they crack the radiator. So mamma bear starts picking them off one by one. Which isn’t the worst thing as they are really irritating. There is only about one shot of the bear that is reused every time it growls. When the bear is attacking the car there is sweet use of a man in a bear suit that had me laughing my arse off every time they used it. That alone is worth the price of admission.