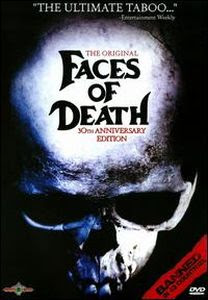 I remember being a kid and finding this on the shelf at Video City. I had to switch the Sticker code on the box to another film and hope the clerk didn’t notice(I was only 11) just to get it out of the store. I took it home and put it in my VCR and wasn’t sure what I was getting myself into. What I saw was some of the grossest and most offensive shit I had ever seen, I didn’t think anything could get me, I had grown up watching everything from Friday the 13th to Bad Taste. But this was real, or at least that’s what the box told me. I loved that I watched it but I swore I would never watch it again. Through the years I heard conflicting reports on whether it was real or not. Now 20 years after I watched it for the first time the 30th anniversary DVD has been released and with the commentary all the myths have been reveled. It’s a bit different watching a cleaned up DVD, but is still surprisingly grotesque. There are plenty of moments that are a bit over the top, especially the narration of Dr. Francis B. Gross. Not something you watch for fun per say, but an interesting watch nonetheless. Get the DVD. The commentary track alone is worth it. Plus if anything just owning a piece of history like this is important for any horror nerd.