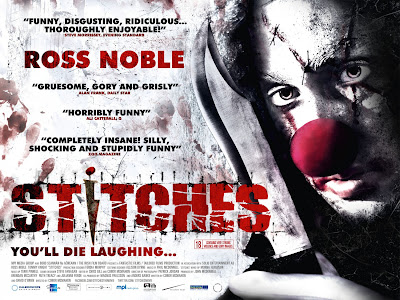 Ever since some jackass didn't realize that new wasn't spelled "NU" and decided to add turntables to their poor definition of metal, clowns have been ruined for me. It got even worse when clowns started smoking meth and writing songs about miracles. As a kid I loved clowns, Pennywise was a badass, and Killer Klowns wore out my VCR. I don't like that clowns have been ruined for me, so when I first heard about "Stitches" I was hesitant, but excited. It seemed like it had real potential. Jump ahead a year and I finally got to solve the mystery.

A clown is accidentally killed while performing at a birthday party full of asshole kids. We find out at a clown Illuminati meeting that he can not rest until he finishes his routine. We jump ahead ten years or so and the same kid decides to have a party again, only this time while still mostly being assholes, they have nicer breasts. This is the basic idea, with plenty of other awesome mixed in to flesh out the back story.

The film opens with some clown fucking, which becomes a montage, which ends in a amazingly cheesy fade. Those are three of my favorite techniques in film right there. Way to start off by punching me right in the dick with your awesome Mr. McMahon. From here we just get some amazing kills that would have Wiley Coyote blushing from disbelief.

"Stitches" is as much fun as it is bloody. The kills are seriously insane, and the blood looks like red paint. The puns are unapologetic, and the actors all seem comfortable in their skin, granted if Stitches has his way they wont be in it for long. For a good time, if your mom is busy of course, track down Stitches.

-Tromeric
Posted by Guts and Grog Reviews at 8:17 PM

Loved it, one of the best clown-themed horror fims ever made. Great gore, awesome soundtrack - excellent!