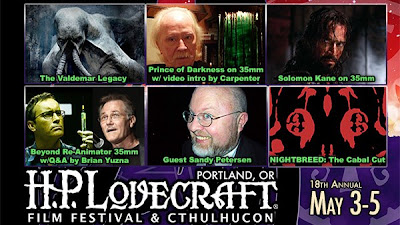 Portland, OR – April 17, 2013 - The H. P. Lovecraft Film Festival® & CthulhuCon is pleased to announce it will be hosting the Pacific Northwest premiere of Clive Barker's “Nightbreed: The Cabal Cut” during the 18th annual festival in Portland, OR, May 3-5th.

A new edition of this infamously studio-slaughtered film, The Cabal Cut restores almost an hour of previously thought lost footage and returns the film to Clive Barker's original vision. Not available on DVD, it has shown in a only handful of select US cities. The H.P. Lovecraft Film Festival® is proud to present it with an introduction and Q&A by restoration director Russell Cherrington.

Festival Director Brian Callahan said, “This will be the 18th year of the festival here in Portland, and thanks to our successful Kickstarter campaign it is going to be the biggest yet, with more of everything that has made this event a local institution.”

The Portland Premiere of “Solomon Kane,” starring James Purefoy (The Following) will be shown in 35 mm for this exclusive NW theatrical screening. Also making their Portland debuts are the exciting Spanish epics “La Herencia Valdemar” and “La Sombra Prohibida,” which have never a US release.

Also showing in 35 mm are the classic films “Beyond Re-Animator” with Q&A by director Brian Yuzna, screenwriter Miguel Tejada-Flores, and storyboard artist DH Covey, and “Prince of Darkness” featuring a video introduction with director John Carpenter. Recently added to the lineup is the 1972 BBC television movie “The Stone Tape,” written by Nigel Kneale, creator of the Quatermass movies.

Independent films include Tom Gliserman's atmospheric feature "The Thing on the Doorstep," Norwegian feature “Dunderland,” plus over 25 short films, most of which you won't see anywhere else, including Eric Morgret's new cut of "The Shunned House," Jihyun Park's "The Music of Jo Hyeja” (a Korean adaptation of “The Music of Erich Zann”), Jovanka Vuckovic's “The Captured Bird,” Voltaire's 5th installment of the Chimerascope series short films “Odokuro,” “Seizures” by the award winning director Nicolas Simonin, “Reset” by Swedish director Marcus Kryler, “Beyond the Basement Door” starring Daniel Roebuck (Lost, John Dies at the End), and many more.

Besides these rarities, come see films that are being made especially for the film festival through the “Lovecraft Under The Gun” 72-hour film competition. Portland filmmakers race to complete a short film, from scripting through post-production, in only three days. The festival audience will choose the winning film after a special screening on May 5th. Open to all local filmmakers, teams can register to participate at Guardian Games on April 18th from 6-8 pm. More info at http://hplfilmfestival.com/lutg.

The H. P. Lovecraft Film Festival® & CthulhuCon is pleased to welcome Guest of Honor Sandy Petersen, the creator of the Call of Cthulhu® role playing game, who will be presented with the Howie Award for his contributions to the genre. Other notable guests include, director Richard Stanley (Hardware), scholar Robert M. Price, artist Mike Dubisch, author Joseph S. Pulver, Sr., and Hugo Award nominee Nick Mamatas.

Brian Callahan added, “Festival goers are going to be stunned by the diversity of programming and guests who are attending. There really is something for everyone at this year's event; there's so much to see, it will be impossible to see it all.”

Since 1996, the H. P. Lovecraft Film Festival® has been a Portland institution, celebrating film, literature, and art influenced by the master of Cosmic Horror, H. P. Lovecraft. The festival has grown to three nights and two days of Horror, Fantasy, and Science Fiction showcasing independent short and feature films, author readings, panel discussions, gaming, and live events on all three screens of the historic Hollywood Theatre.

The Festival opens at 6 pm on Friday, May 3rd with an evening program, and continues through the weekend with afternoon and evening shows on Saturday and Sunday. Tickets are available through the Hollywood Theatre website and box office.