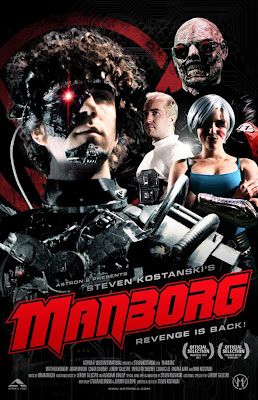 A man is killed in action and brought back as a cyborg to fight Nazi demons in the future along with Liu Kang from Mortal Kombat. There is your basic plot. Is it a simple one? Yes, but that is part of Manborg's charm.

Manborg is a legitimate sci-fi/action film that can proudly sit on your shelf with films like "Robocop" and "They Live" as well as "Class of 1999" and "1990: The Bronx Warriors."


-Tromeric
Posted by Guts and Grog Reviews at 7:25 PM

Got it pre-ordered. Can't wait.