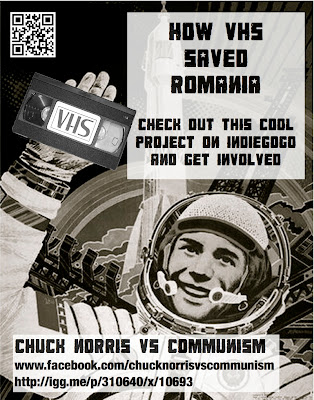 From the press release:

"In the 1980's, Romania's communist regime reached its most drastic stage. TV was reduced to two hours of broadcast, focused mostly on praising the dictator.
Hidden from the scrutinising eyes of the Secret Police, Irina Nistor dubbed over 5,000 American blockbusters that entered the country illegally and were distributed on the black market.
Her husky and high-pitched voice became a symbol of freedom and Chuck Norris, Van Damme and Bruce Lee became national heroes.
Chuck Norris vs Communism is a film about a VHS phenomenon that took hold of an entire country. It is a film about a Mafia-like operation. It is also a film about the love of film and ultimately, a film about oppressive regimes, censorship, freedom and creativity."


Please help this film happen. My attention is at full.