Five Across the Eyes -Greg Swinson/RyanThiessen

Another guest review from Jimmy Caution this time, check out is label Amputape for some badass tapes and zines and whatnot. 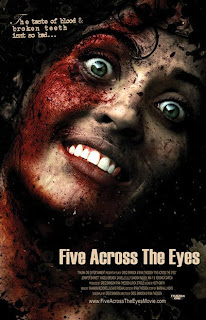 Okay so this is supposed to be a real time film shot on a really shitty DV camera about some girls going to or coming back from some sporting event or something. Since the film is in “Real Time” so is this review. The camera work is an abhorrent attempt at “Cinematography”.  Everything looks out of focus and blurry (or maybe that’s my fault?) They just keep fucking with the camera while the five shitty actor girls vomit their useless dialogue.  The ladies decide to deviate from the main road their friends are on and take some side road “Just to see where it goes.” Are you fucking serious?! Oh and big fuckin surprise their cell phones stop working. They all have shitty coverage apparently. Hmm, there’s a bunch of words shrieking through my TV, I think it’s supposed to be dramatic.  Oh shit! One of them is a Christ-y and started praying!!! Wow. Oh yeah, I forgot to mentionthere’s someone following them. She looks like a pissed off soccer mom with a shotgun. It would be just fine if she blew their heads off right now. These chicks are super annoying and I can’t wait for them to be killed.  Shotgun Soccer Mom orders the girls to strip and threatens to shove her shotgun up this chicks ass and blow it through her mouth? Sounds sexy.Now she makes one of them piss herself ala The Last House on the Left but completely unmoving/boring like the shitty remawas. Oh SSM just left, sorry, I was checking my email.
Anyway, um the girls are crying and giving topless hugs to each other now and even that is boring. So far the most interesting thing was a moth or something that was flying around the cars dome light for a minute. It bailed pretty quickly. Much like I would like to do right now if it wasn’t for the fact that I promised Tromeric I would send him something for the Grog. These girls are reaaaally stupid.After the SSM leaves they follow the same fucking directionas her to escape?  Of course SSM starts after them again. Are you sick of reading this yet? I would be. Did anyone see that Korean film The Chaser? That was very well made, very suspenseful. Naboer is excellent as well, the director understands how to tell a story and keep it interesting (hint hint). HAHA one of the girls shit in her hand and threw it on the SSM’s window.  Oh now a sneeze puke. Is this why the DVD cover says attention grabbing crap like “Brutal” and “A film that demands to be seen!”?  Can you feel how much I am hating this? I could be making a turkey drawing with my hand or reading the bible, or some other pointless activity and it would be better than this. Have you seen how fucked up Roger Ebert looks now? What the fuck happened to him? He uses a Hawking style computer voice to speak and has this insane perma-smile on his face. I should be watching video of that right now.
I kind of admire the lack of any sort of score or soundtrack in this. Yet I feel like if there was something to drown out all of the screaming I could enjoy it better. I’m the one who keeps screaming by the way. Fuck these athletic girls are strong and smart. They try to hide the car and can barely push it a couple of feet and then toss a few branches on the windshield to hide it. Kind of like when you were a little kid and thought if you couldn’t see someone when you were hiding they couldn’t see you. FUUUUUUCK there’s another hour of this left. Wait there’s only one girl in the car now? I’m sure the massive flashlight she is using to escape won’t draw the SSM’s attention at all. I’ve seen better movies from Brain Damage. There’s some Evanescence kinda song playing and a bunch of the girls are back now? I’m confused and insulted by this. The special effects are so shoddy. This girl is supposed to have blood all over her mouth but she just looks like Spaget from Tim & Eric. She had a screwdriver stuck up her vag, I guess that’s “Shocking”. The girl that’s driving gets glass from the windshield stuck into her eyes but is looking at the blood on her hands and freaking out? Hmm, she is also able to drive and see again after wiping her eyes on her friends’ sleeve?Best line of the movie “If she kills you you’re dead!” Seriously someone took time to write that. Man, fuck this movie. One of the quotes on the DVD sleeve is from  SlasherPool.com saying this is “Brilliant, demented, and disturbing…One of the best horror movies ever!” The person that said that either got paid to do it or has never seen a horror film before.  This lacks any real intensity, emotion, or believability. With what the Directors were trying to accomplish with the “You’re there in the action” style it all fails miserably to achieve any semblance of reality. This is crap. I’m even going easy on it, I could say a lot worse with more detail but why fucking bother. And to the Directors:when you Google yourself and end up reading this review of your fucking horrible movie, just remember that I paid for it. I spent money on this. Your movie was crap and there were two of you working on it! Didn’t one of you at least say to the other at some point “You know um, this doesn’t really make sense and is pretty horrible.”? Fucking hell! Better luck next time guys. How you got such hyperbolic quotes from some semi-respectable film sites blows my mind. That is the only thing shocking and terrifying about FIVE ACROSS THE EYES.
.01/5
-Jimmy Caution
Posted by Guts and Grog Reviews at 3:52 AM