The Doctor Prescribed The WIld At Heart Soundtrack 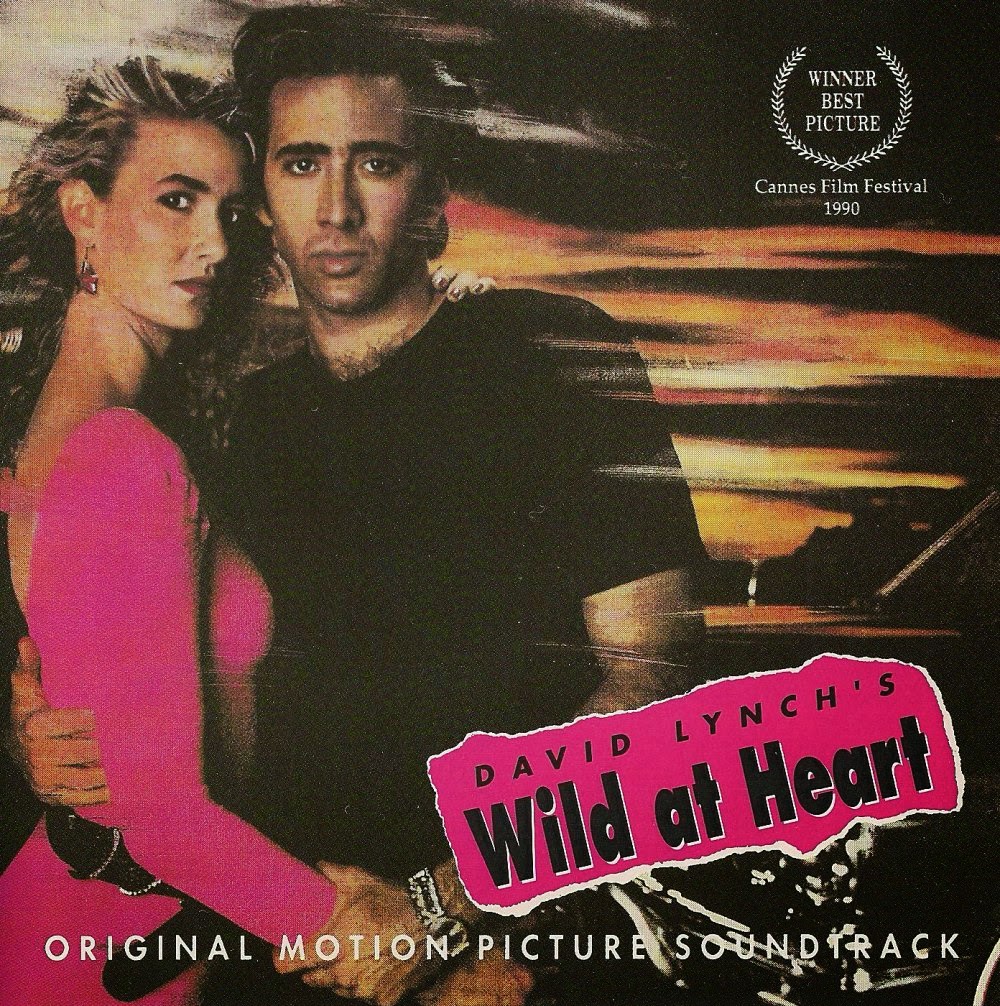 With the Blu-ray release of Wild at Heart coming out this past year from Twilight Time I had the chance to enjoy one of my favorite David Lynch pictures and perhaps the last movie in his filmography that I really “got”. After this Lynch’s work would start a slow descent into strange timelines, even more far out surreal imagery and symbolism as well as narratives that form like a game of Candyland without a goddamn deck of cards with which to guide you through the Candy Cane forest. Lynch and I have decided to agree to disagree about the period after Wild at Heart from a philosophical stand point. I choose to enjoy the movies before and acknowledge that he’s just too damn smart for me. That disagreement and lack of enjoyment does have one major caveat, soundtracks. Lynch creates soundtracks that really get me. They are long winded musical nightmares of soundtracks with a variety of style, music both original and sampled from existing sources and with groundbreaking artists. The Lost Highway soundtrack is still one my favorites with everyone from Nine Inch Nails to Rammstein and David Bowie filling the track list. Hell, even the “Lady in the Radiator” track from Eraserhead is sublime especially when covered by The Pixies. With Wild at Heart fresh on my brain I wanted to take some time to walk down the soundtrack released for this picture. Song by song. Band by band. Let’s get familiar with the way Lynch uses music.

1. Im Abendrot ( Excerpt) - Gewandhausorchester Leizpig
Gewandhausorchester Leizpig was an 18th century orchestra that created some largely dramatic works. This is perfectly evident in this almost Italian sounding orchestral work that sings of promise and tragedy, perhaps the perfect lead to Wild at Heart that takes the viewer through every kind of emotive experience one could have. It’s melancholy waxes and wanes and turns into a big loud promise only to drift of into uncertainty. Fate. Lynch just seems to love the concept of Fate (somebody introduce him to Laurie Strode’s old English teacher).

2. Slaughterhouse - Powermad
Perhaps only loved second to Wicked Game on this soundtrack, Powermad creates one of the most memorable moments in Wild at Heart transitioning between thrash metal styling to Nic Cage on the mic doing Elvis. Powermad never really got the attention they deserved by to a core fan of 80’s metal thrash heads they were influential in the speed scene. 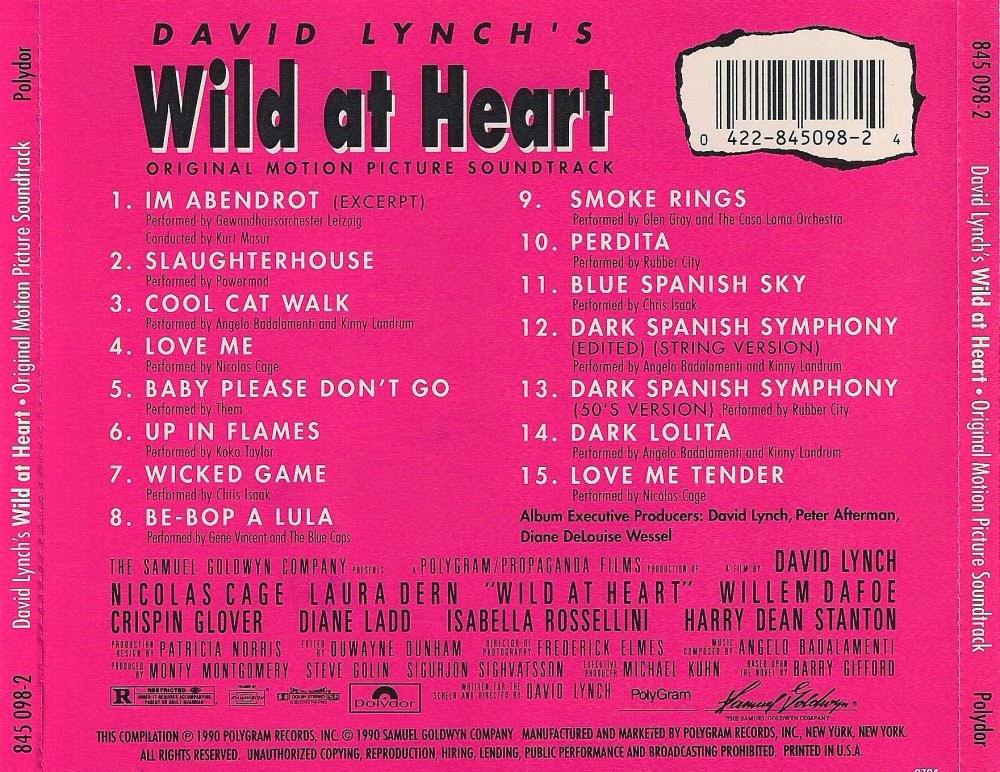 Badalamenti is a favorite composer of Lynch’s creating score for Twin Peaks, Lost Highway and Mulholland Drive. His collaboration with composer Kinny Landrum sets the back drop for the movie. Landrum backs up the synth and also worked on Twin Peaks.

Cage doing Elvis is a thing to be seen and embraced. Of course we are familiar with the Elvis Presley hit, but hearing and seeing Cage perform this loving ballad to his Lula is something to see. His voice is smooth and silky. It’s almost as if Cage is just impersonating The King, but I’d say that his vocal styling is still uniquely Nic.

5. Baby Please Don't Go – Them
If you like one Them song then you like THEM all. This is a classic garage song with country, chicken picking hook that screams The Rolling Stones. It also has the same feeling as 13th Floor Elevators “You’re Gonna Miss Me”.

Koko is classic Blues from the founding era of modern Blues music recording with Chess Records and Alligator with some of the greatest voices and musicians to ever play their tears on their sleeve. Her contribution to the Wild at Heart soundtrack is a sultry, sad piece heavy on the crying horns and slow, mellow “heat of the Chicago summer” feel. Beware this track. You may want to have a drink. Better make it two.

7. Wicked Game - Chris Isaak
This was the song with which has become most associated with Wild at Heart due the sexy music video featuring Helena Christensen. I remember when it came out, sneaking long drawn out eye grabs of the video before my parents would turn it off. I still love that video and get sentimental to the song. It also makes the perfect song to enjoy a large bottle of bourbon and self pity or perhaps, if you’re lucky, a pile of well kept Percocet.

8. Be- Bop A Lula - Gene Vincent And The Blue Caps

This song is so iconic and intrinsic to the history of rock music it is the perfect back drop to the bad ass Rebel Without a Cause feel of Wild at Heart. It also sounds an awful lot like Elvis but I assure you that it is Gene Vincent, and he is amazing.

Classic piece of 30’s jazz. Subdued. This is perfect depression era stuff with beautiful clarinets riding up and down out of a bed of somewhat delicate sadness. A very popular song to cover from the big band era.

Another haunting piece by Isaak that didn’t attain the same popularity as Wicked Game, but shows off more of his dark cowboy styling with a hint of a yodel.

Another beautiful piece that feels just bigger than the goddamn world and plays a wonderful theme with great drama and angst behind the large opening.

A rendition of the Badalamenti theme, created by Rubber City whose member David Slusser has been a collaborator with John Zorn and Mike Patton Rubber City’s other entry Perdita sounds a whole lot like RV by Faith No More so finding out that Patton and Slusser had collaborated makes all the more sense.

15. Love Me Tender - Nicolas Cage
This song always makes me cry, but much in the same way that Love Me is used in the film, also performed by cage this is more a song of enduring personal freedom and love beyond the forces of filth and evil.

Thanks to Tromeric for having me along for the Lynch Week 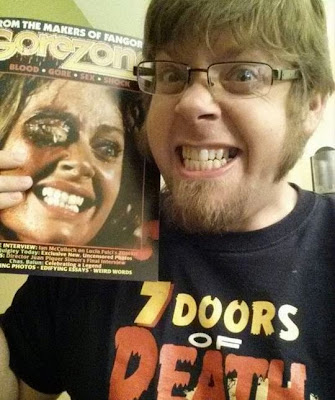 From the bowels and brains of American International to the rib cage and eye sockets of Amicus, Dr. James Terror will write your eyes shut with, well... TERROR!!! (and perhaps a bit of camp now and again for flavor). The focus of DOCTERROR.COM is to enjoy and shape the horror-verse for the horror community. We review a variety of horror and science fiction titles with a focus on positive or constructive reviews meant to guide the audience rather than create a negative environment. You'll find retrospectives, lists, faux movies and faux video games as well as giveaways and tributes.Writing Your Eyes Shut From the Pre-History to the Post-Apocalypse of Horror. In addition to DOCTERROR.COM Dr. Jimmy also contributes to The Liberal Dead, The Dead Air Horror and Genre Podcast and The Little Punk People Blog. Look for his annual Italian Horror Week mid-July featuring guest writers, giveaways, and 8-Bit Faux video games by Hacktvision based on some of your favorite Italian Horror features.
Posted by Guts and Grog Reviews at 12:23 PM