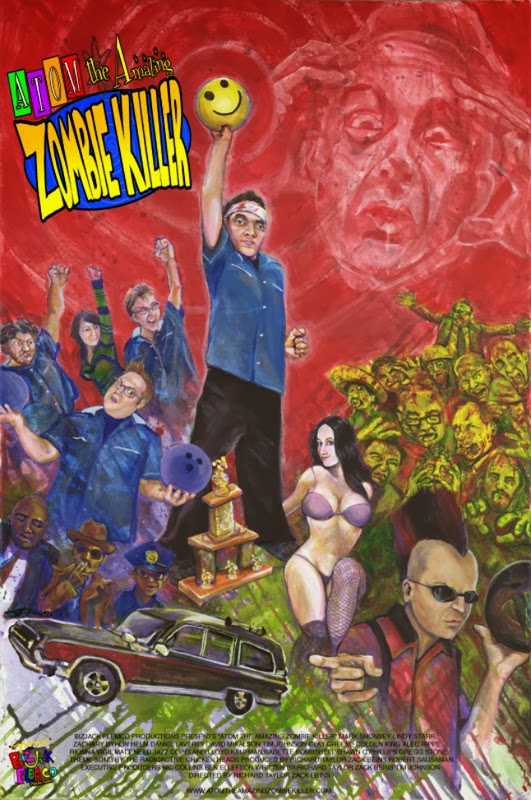 Atom is just your everyday horror nerd. He loves zombies, horror, kicking it with his friends, and bowling. He has a girlfriend who loves to fuck, but doesn't appreciate any of his passions. She thinks his friends are useless, that his life is lacking purpose, and wants nothing to do with zombies, or horror of any kind. She is a horror hating whore basically. After Atom is kicked out of the bowling league thanks to those asshole slashers, his girl convinces him to skip movie night with the boys to go to some bullshit ass shit RomCom. He uses some tomfoolery to get her into the new zombie film. She is not amused. She pukes, he motorboats it. It's not enough. She leaves him for Dario. What is he to do now? Save the world from the zombie apocalypse? That is, if there is a zombie apocalypse. We will take a journey in and out of reality with Atom to find out what the true threat is.

Within seconds of popping this bitch in, I felt like I had taken a time machine back to my childhood. Sitting in my bedroom, watching the VHS I had rented. Or even recording it off of "USA Up All Night."
Atom the Amazing Zombie Killer is reminiscent of  many of the Troma films I grew up on. It is in your face with obscenities, disgusting sound effects, gore gags, references, taglines, puns, and hilarity.

The acting is the fun kind of bad. Not trying to hard out of nervousness, but trying to hard, because it's fun. The costumes and set design are often used as a punchline, and they aren't just tongue in cheek with the dialogue. They take their tongue, and forcibly shove it down your throat, until it comes out of your asshole, and sneaks up on your friend. It then starts giving your friend the best rim job they have ever had. They look satisfied, but ashamed. You may be worried, but you will quickly realize that shame is easy to get over, and you and your friend are having the time of your life. I may have gotten a bit off track. Basically I am saying this movie is pretty funny, and share a rimmy with your friend.

This is a film for people who enjoy taking low brow, and finding a way to stomp it into the ground. It has a ton of heart, sure when you poke the heart with a stake it oozes fecal matter, but it still has heart. It wasn't made to change the world. It wasn't made to win an Oscar. It was made because some dudes love horror, and wanted to share that love with the world. They wanted to have a good time making a film, and in turn you will have a good time watching it.  It is gross, fun, hilarious, slimy, oozy, ridiculous, and more over the top than a semi truck in an arm wrestling match.

Posted by Guts and Grog Reviews at 4:39 PM