Send a S.A.S.E., Or How I First Saw Extreme Films 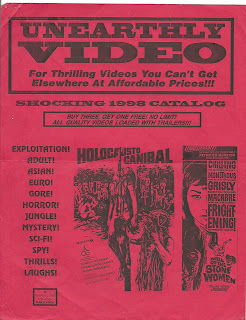 I’d like to talk to the younguns among us for a minute. Those who don’t remember a time before Google. Those who have only owned VHS tapes as antiquated curiosities. Yeah, you know who I’m talking about. You young whippersnappers have no idea how good you have it. Back in the dark ages when I was first seeking out horror beyond the mainstream, aka the late 90’s, everything you can think of wasn’t at your fingertips. There was no Blue Underground. There was no Grindhouse Releasing. There was no Synapse, Vinegar Syndrome, Mondo Macabro, or Unearthed Films. Hell, Anchor Bay was just getting started. A place like Diabolik DVD would have been horror fans of the day’s wettest dream. There sure as hell was no Pirate Bay. Most of the time the only chance you had to see extreme domestic flicks was to hit the video store jackpot. The only way to get uncut foreign movies was on ridiculously expensive laserdiscs, and who the hell had a player? 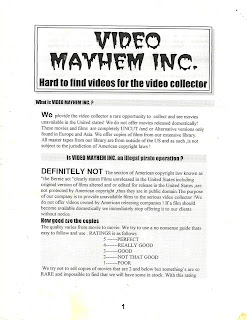 What we did have back then were gray-market bootleg tape dealers. Their ads populated Fangoria’s classified section and promised the rarest, nastiest, most hardcore horror flicks from the worldwide underground. Averaging about twenty bucks a pop, these tapes could have been pristine transfers off of a laserdisc or a barely visible fifth generation video dub. That was the chance you took. I never had the money to order many, but I used to read these catalogs like a combination of sacred text and Sears Wishbook. I know. I’m dating myself again. These catalogs were magical tomes full of forbidden fruit to salivate over. The awfully written entries described the kills you didn’t see in the version your local video store had. The hyperbolic language made these flicks sound like pure filthy sin encased in plastic. Hell, I can quote some of the descriptions word for word. I’ve since seen a lot of these movies, but I still return to these lists now and then to find an unknown gem to track down. 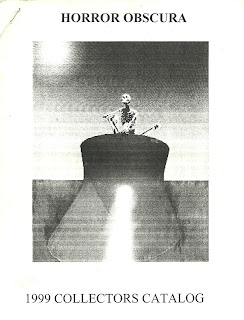 I dug out four of these catalogs that I had kept, ranging from 1996-1999. For those of you who never experienced the wonder of these founts of extreme cinema knowledge, I present an A to Z sampling. A time capsule of a forgotten age of extreme cinema collecting. To preserve the authentic experience, all entries have been reprinted EXACTLY as they appeared. All grammatical, spelling, and factual errors have been left intact because that was part of their charm. So dive on in. I dare you to read these descriptions and not think “Sweet Mother of Hell, I HAVE to see that! 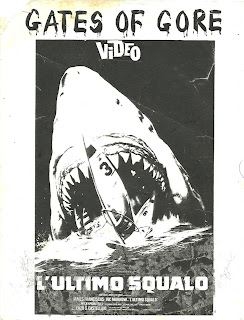 Anthropophagus 2 Uncut print of the Joe D’Amato sequel to Anthropophagus the 1981 film “Absurb”, “Grim Reaper 2” was never shown in U.S George Eastman returns at the brutal flesh eating killer whose body can rejuvenate dead cells& stalked by a priest. Much better & more gore than part 1, with heads cut off, band saw lobotomy, electric screwdriver through the heads. (VG)

Contamination (aka Alien Contamination) – UNCUT print of this chunkblower of a film from 1980.After an abandoned vessel turn’s up at a New York harbor,some cop’s go aboard the ship to search for passenger’s,they find the ship deserted except for a bunch of pod like melon’s,that explode spraying everyone in the vicinity with some kinda fluid that make’s people’s chest’s explode. You have to see the exploding chest effect’s to believe it,absolutely amazing.And as a bonus this film also comes with the original trailer.


Dead Boyz Can’ Fly – Some punk’s decide to take over an office building and randomly rape and murder the occupent’s,I was very suprised to see this motherfucker being released in 1994,at least some Direcotr’s out there still have ball’s.Highly entertaining stuff for the whole family.

Guinea Pig 1thru 7 This is one nasty tape series! – They were BANNED in Japan after thet came out because of all the copy cats out their who emulated scenes from them !These are disgusting the 1st tape has a guy dismembering a chick for one hour, the second one has 3 guys torturing this poor lady for the whole tape, the 3rd tape a guy finds a mermaid in the sewer brings her home & starts to paint her as she rots ,then he spazes out then dismembers her !The 4th tape a little midget tries to bring his love back from the deadly using science .Of coarse he uses the most excruciating lab tests their disgusting. The 5th tape is about 2 lovers who kidnap a female and torture her to within an inch of her life at the same time their doing it. The 6th tape a guy gets so bored with his life he tries suicide and finds out he can’t die he feels if he keeps hacken away at himself he’ll die sooner or later, he don’t The 7th is like a game show hosted by some weird transvestite who hacks & slashes anyone that gets near her this is one of the most excruciating flicks out their PLEASE NO ONE UNDER 18

Horrifying Experiments of SS Last Days – Uncut import print of “The Beast In Heat’ the 1971 film from Ivan Katanski. This film has been called crude & tasteless, terminally outrageous & the most depraved of the video nasties. A beautiful female SS officer/doctor creates a genetic mutant human beast which she uses to torture & molest female prisoners. Plenty of sadistic titillations gore & nudity in this shocking 7 appaling film (VG)

In A Glass Cage – the 1988 devastating-soul crushing film by Augustin Villaronya, about a crippled NAZI doctor and a young man to take care of him, with tons of sick scenes, child killings, sexual perversion, a boy tied down a a giant hypo full gasoline injected directly to his heart. Realy sick. NOT FOR ALL TASTES!! (Good)


Just Before Dawn – From the director of such classic’s as SQUIRM and BLUE SUNSHINE,comes this charming tale of a group of landowner’s going to the mountain’s to check out their property when they become prey to a bunch of inbred psycho squeeling twin hillbilly’s. This makes DELIVERANCE look like sesame street,and directed by one of my fave’s( who never received much credit for his film’s).


Killer Snakes – X-RATED Shaw bros. film About a guy & his snakes. He’s a perfert so he ends up using his snakes to help him rape unsuspecting women .These little buggers climb into every orifice they can get into!!!RATED 4

Mystics In Bali - (IN, 1990) A flying severed head (with entrails attached) eats people, including fetus from a pregnant woman! Letterboxed. (FI) (18+)

Opera – Uncut import print of “Terror A The Opera” the 1987 film by Dario Argento, Not the U.S released. A maniac brutally murders people in front of his favorite opera singer whom he forces to watch by tying her up, gagging her and pinning her eyes back with needles. Very gory with the usual Argento style. (EX)


Perfume Of A Lady In Black – Uncut lbx of the 1973 giallo from Francesco Barili. When her friends start mysteriously being killed, Sylvia’s life takes downward spiral leading her to a series of brutal murders. The shocking, grueling bloodbath of an ending rivals anything seen in “Cannibal Holocaust”. One of the best European thrillers of the 70’s, atmospheric, very obscure, highly recommended, & undiscovered masterpiece. With Mimsy Farmer. (Good)

Queen’s High – The 1990 film with Cynthia Khan as a mob-boss daughter out for revenge against a rival mob that killed her father. Simon Yam also stars in another self-righteous pretty boy role, who meets a messy demise at Khan;s wedding. Lots of mass bloody shootings & great martial arts scenes. With subs.

Underground Terror – Very wild gore film about an ex-mental patient and his buddies terrorizing folks under the N.Y.C. subway system. He likes to cut off ears & fingers to keep as souveniers. (EX)

Violent Sh*t – Don’t blame me if you are seeing what you ate about 3 hours ago after you watch this movie!!! This is the type of shit that makes people want to change the 1st amendment!!!!!!!!RATED 5

White Dog – UNCUT import version of this very rare,and entertaining film from Sam Fuller.A woman hit’s and injures a white german shepard on her way home from work,and after bringing it to the vet decide’s to keep it,until it start’s going apeshit and attacking black peple,See this dog was raised by racist’s who trained the dog to only attackblack people. Well she turnn;s it over to a ballsy black dude who want’s to try to “save” the dog, with bad result’s. This was considered extremely controversial at it’s time (I don’t have a release date but in the 1970’s), and I’m not even sure if this was ever released.

Zoltan Hound Of Dracula – Yep even the prince of darkness has a doggie aawww isn’t that cute ! Well not if he’s ripping your throat out rated 4+ 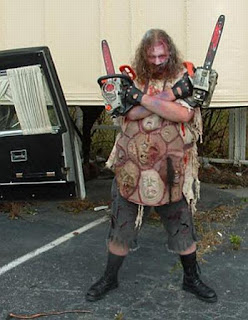 Nathan Hamilton is your average "slightly eccentric" horror movie junkie. At the age of 32, he’s already been involved in “horror business” for 20 years as a haunted house actor, ghost tour guide, and genre blogger/critic/journalist. He currently writes the horror movie blog Son of Celluloid. Nathan is also quite proficient with a chainsaw. You can decide for yourself if you’d rather experience his writing or chainsaw wielding talents. He’s happy either way.

Posted by Guts and Grog Reviews at 4:00 PM