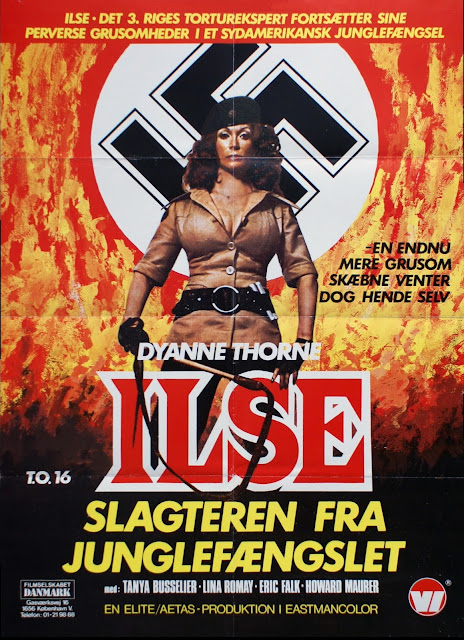 No actress in genre history has elevated a wardress to the cruel carnal campiness that Dyanne Thorne created with Ilsa. Originally released as GRETA THE MAD BUTCHER, this unofficial entry in the Ilsa series doesn't deviate from the formula or the character. I'll admit, I'm a huge fan of this sick and twisted garbage. The Ilsa films almost exist in a subgenre by themselves; reminiscent of Audrey Campbell’s Olga character from 60s sin-ema and transporting the lurid covers of old men's magazines to the screen and punting them through a goal post of filth far beyond the expectations promised in their advertising campaigns. They shock, titillate, disturb and enrage. They deliver the goods ten fold. The Canadian producers of the Ilsa films pimped their star overseas to Swiss sexploitation producer Erwin C. Dietrich who hired Jess Franco to helm the project.

In a corrupt South American dictatorship, a badly beaten escaped inmate shows up on the property of Dr. Arcos (Jess Franco). Barely clinging to life, the nude woman reveals atrocities that are being performed at the Las Palermas Clinic for Sexually Deviant Women. After his calls for an investigation go unheard, a young woman named Abbey (Tania Busselier) persuades the doctor to have her committed to the clinic so she can investigate the disappearance of her sister.

Greta (Dyanne Thorne) runs the top of the asylum with a long bull whip and the basement with a needle full of political subversive disfiguring acid. In addition to using pet inmate, Juana (Lina Romay), as a human pincushion, she runs a side business with her assistant, Drago (Eric Falk), forcing prisoners into porno and snuff films. It doesn't take long for the undercover Abbey to end up on the receiving end of Greta's abuse. Growing suspicious, she gives Juana free reign to uncover the snooping girls true identity. In one show stopping scene, Juana forces her to become human toilet paper in exchange for information! While torturing Abbey's sister, Greta learns Dr. Arcos is the leader of the revolution. She immediately dispatches henchmen to kill the idealistic doctor, thus trapping Abbey forever inside the clinic.

Erwin C. Dietrich and Jesus Franco's script gets the most bang for its Ilsa buck by discovering uncharted waters of bad taste. After Drago's snuff film connection asks for something juicier than rape, they decide to film an orgy of psychotic male inmates raping and killing mentally and psychically handicapped female prisoners. With transsexual shower scenes, human branding and racial whippings, it is sick beyond belief and never afraid to go all the way. The official Ilsa films require her demise but these filmmakers are not about to deliver a happy ending. Abbey is forced to watch her sister suffocated to death by Greta and then, moments before her release, she is lobotomized. Reducing the heroine to a drooling epileptic vegetable causes the inmates to rebel and cannibalize the busty Greta. As shots of inmates teeth sinking into her giant breasts are mixed with real footage of lions and tigers ripping the flesh off their prey as a smirking Drago films the ultimate snuff film from a secret hole in the wall.

Dyanne Thorne claims that the multinational cast speaking in different languages and post dubbed into English were using a different script than the one she was performing and Franco was shooting scenes below her waist without her knowledge and consent. That might be true, but her accusations that GRETA THE MAD BUTCHER ruined her career are the rantings of an elderly femme fatale trying to wash shit off her hands. It's obvious the Ilsa films gave her lackluster career an unexpected boost from the z grade softcore pictures like THE EROTIC ADVENTURES OF PINOCCHIO (1971) and the hardcore porno film THE SNATCH (1974) conveniently absent from her memory. I suspect ILSA TIGRESS OF SIBERIA's audience-insulting script was more likely the nail in Ilsa’s coffin and Thorne's career. Roger Corman and Ivan Reitman produced the film and totally missed the formula audiences craved. If the proposed ILSA MEETS BRUCE LEE IN THE BERMUDA TRIANGLE had been produced with the evil gusto of WANDA THE WICKED WARDEN - lines would of stretched around city blocks. Other than laying nude atop Lina Romay, Thorne's only sex scene in GRETA THE MAD BUTCHER involves real life husband Howard Maurer, whom she met on the set of WHAM BAM THANK YOU SPACEMAN (1975). Not that it's a big deal, she is nude often and rarely does a moment go by without a naked breast or twat on display. Thorne does what is asked of her, portraying Greta as a red headed clone of Ilsa complete with German accent.

The real surprise here is the performance of Lina Romay. After Jess Franco's favorite actress Soledad Miranda died in a car accident, he became infatuated with Romay, the wife of a photographer friend, and started casting her regularly in horror and erotic films. By the time GRETA THE MAD BUTCHER was made, both Jess and Lina had divorced their spouses and entered into a common law marriage that lasts to this day. The self proclaimed exhibitionist and untrained actress is given more to work with than just lying on her back and actually manages to bring some depth to a character that could have easily been one of the one note wonders associated with such Eurotrash.

Cinematographer Ruedi Küttel abandons the bright contrasts of saturated color from LOVE CAMP and WOMEN IN CELL BLOCK 9 for dark earthy tones that manifest visual associations to snuff films and emotional responses of rot and decay. The film score is minimal. The only location full of music and color is the cantina where the snuff films are sold. This is also the setting for an in-joke in which Drago picks between two songs on the juke box by artists named Emmir Deadato and Al Romero - obviously referring to directors Ruggero Deodato's CANNIBAL (1977) and George Romero's NIGHT OF THE LIVING DEAD (1968) whose subject matter foreshadows GRETA THE MAD Butcher’s finale.

There are two versions on DVD to choose from, VIP's beautiful transfer that features a Franco & Dietrich interview and the U.S. Anchor Bay release which has a darker image, but contains audio commentary from Dyanne Thorne and Howard Maurer. It's an interesting contrast, as Thorne believes the film never made any money and Dietrich reveals it grossed more money internationally than THE OMEN! Personally, I would pick the US release for the lively commentary at a third of the price. For all of Franco's on set sneakiness, the couple adore him and Lina Romay. Their fond production memories and attempts to justify Ilsa's existence make for an enjoyable audio track. Whichever copy you choose, I must warn you: because of new censorship laws the version VIP released through Anchor Bay in Great Britain is missing 2 1/2 minutes of sex and violence.

GRETA THE MAD BUTCHER is the best of Jess Franco's nine women in prison films and that’s a pretty tall order. While 99 WOMEN (1969), BARBED WIRE DOLLS (1975), WOMEN ON CELL BLOCK 9 (1977) and SADOMANIA (1981) may be more sexually explicit, GRETA THE MAD BUTCHER is by far the most coherent. With it's eternal ability to offend the status quo, every aficionado of scuzzy cinema should proudly display this historical exploitation tour de force in the extreme section of
their DVD shelf 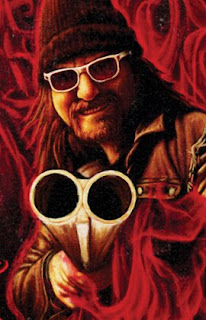 James Bickert is the man behind the modern day classic "Dear God No!" Keep an eye out for his next film "Frankenstein Created Bikers." It is going to blow the worlds mind.
Posted by Guts and Grog Reviews at 5:51 AM