KWEENY’S TAKE ON MARTYRS: AN EXPLORATION ON TORTURE LOVE-MAKING 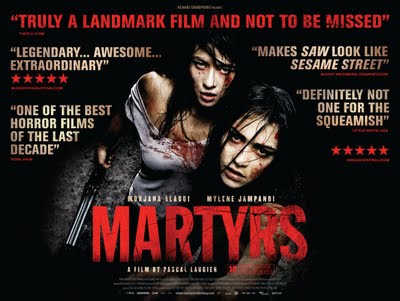 I’ve avoided writing an outright a full piece for this film even though I do love it. At the same time, I feel very personally about it. I’ve put it in top ten lists; I’ve commented on it briefly in other people’s reviews, but otherwise, I have avoided delving deep. So when I was asked to write something for Extreme Horror Week, it seemed like a sign that I should deal with the beautiful horror that is the movie Martyrs.


So I’m rolling up my sleeves and sticking my hands into this gory mess. Let’s hope we both are more enlightened for it.


It’s pretty well known by now to any who’ve even heard of this film, that it’s brutal. The thing people don’t express deeply enough in my opinion is just why and how brutal it is. Possibly because they don’t touch on the effect the film has on abuse survivors. Trust me, if you are one and you watch this movie, you may need aftercare to get on with your day.  Every slap, every punch feels like a real blow. I was watching this with a friend the other night, and when she saw Lucie come in with a shot gun shooting the adults without even blinking, she was both impressed and shocked.


“They waste no time getting their point across messily.” She said, and it’s true. When you watch Anna get the crap beat out of her and just take it, you feel it. You also know that out there in the world, a woman is getting beat up that brutally, and she’s likely taking it, because the person who’s beating her is more than half her strength and size. This level of violence happens in real life, and when you watch a film like this, it reminds you. When you see little Lucie escape her captures, you know there is a little girl out there trying to escape extreme child abuse. And when you see her traumatized, bloodied face screaming wildly, it feels real. They don’t pull the camera away to give you a breather. They make you see it all, right down to the bloody marrow. So when you see the size difference between the starving Anna and the huge man beating her, and then you hear the punch connect with her gut, you feel it down to your core.


Let me give you a few examples so you understand my dark analogy better. Human Centipede 2, is torture porn. It’s cheap, it’s sleazy, and it’s a throw away. Not to say these are BAD things, unless you do have taste and find things that are dirty, repulsive and made for pure shock value to be garbage. Sometimes that’s exactly what you want to see. The Saw series is torture sex. They’ve got some thought put into them, some excellent and creative kills, and some thrilling moments. If you’re a fan of the series (which I happen to be) you love the characters and their stories as much as you love the torture.  Sex is fun, it’s pleasurable, and leaves you wanting more if done right. You can even have some level of emotional attachment, but you aren’t committed just because you had a good orgasm.


Torture love-making is different. There is always an emotional investment, even if not intended. It sweeps over you like a backdraft and changes your life. You will put up with watching the too-real violence portrayed on screen, which is forced upon the protagonists, and you will feel for them. You will know them intimately by the time it’s all over, even though you know next to nothing about them. You will suffer alongside them until the very last scene in the movie, and you will be transformed by it.


Because accomplishing a successful martyring of someone is not an easy task.


The violence done in the search for the prefect martyr isn’t done for any sadistic pleasure. There is something cold and methodical about it, but that’s because of the goal. It’s still a fucked up cause this organization is championing, but there is also something spiritual about it. Throughout the film we are plunged deep into a world of violence. Nothing sexual is ever done to the girls who are tortured. It’s almost “clean” the motivations behind it. As we see later on when Lucie has grown up and hunts some of her torturers down, the organization evolves to be a very productive, effective group. They become less primitive in their operations, and treat the torturing like a duty or job they need to accomplish and attain the spiritual goal. It’s a dark hero’s journey for females. In fact, of the arch-typical hero’s journeys, martyrdom is the only one traditionally told about women.


Make no mistake, this is a female story. All the leading characters are women, from our two protagonists Lucie and Anna, to the leader of the strange torture cult/organization that seeks out subjects to be martyrs.  As it is explained by the leader who is only referred to as Mademoiselle, through their trials they have realized only young women can even attempt to achieve martyrdom.  Most subjects just go mad and become victims. Lucie is considered one such victim, likely because she escaped before she either died or reached the martyr state and died.


The concept of martyrdom is done so beautifully in this film, it adds a spiritual layer that makes the too-real violence of the film more twisted, and yet, more beautiful.  To be a martyr, and not just a victim, is one of the powerful messages this film brings. What makes someone a victim? Since Lucie escapes we hope she is free from torture, but when you see how broken she is, you realize she hasn’t really escaped at all. She basically brought her torture with her in her wounded mind. Anna however, is never broken. She transcends into martyrdom, and goes beyond the flesh into something more. I won’t ruin it for you, but when you watch it you’ll see what I mean.


This is an intensely powerful film, that while I recommend it highly, I also hope you take caution when choosing to view it. It can be a therapeutic and darkly illuminating experience, but it can also break you if you’re not prepared for how fast and hard this film will come at you. It doesn’t just sucker punch you in the gut; it will blow you to chunks like a shot gun.


It’s up to you to decide if through viewing the film you will fight it and be a victim, or if you will surrender to it and martyr yourself. 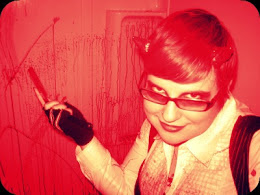 Kweeny Todd is a blog for all lovers of the darker realms. Horror blogger Kweeny and friends examine the genre they love through their own peculiar lens, bringing their view with sardonic wit, humor and intelligence. Kweeny also likes to share bits of her personal life, dark curiosities and some of her other wacky interests to entertain readers, as well as amuse herself. Her minions Lord Bearington and Mad Jester get roped into her antics and are usually forced at razor blade point to add content to this Glory Kingdom she rules. Hopefully this explains everything, or explains nothing enough that the goddess Eris is pleased with our efforts. HAIL DISCORDIA!
Posted by Guts and Grog Reviews at 5:55 AM