Nope, this isn't exactly a popular movie (don't worry if you haven't heard of it before), and it's also far from being a classic. To be fair, it's not even a "great" movie. It's about as flawed as the "Human Centipede" flicks, it looks a bit like a made-for-TV film and it's packed with many massively mediocre actors. Oh, and it's disgusting as hell - but dammit, at the same time it's sooo much fun 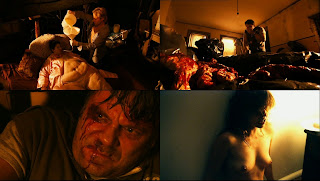 "Feed" is a nasty little Ozploitation flick about the quite gross feederism-fetish which refers to a bizarre type of sexual relationship where one person (the 'feeder') gets sexual pleasure by feeding the other person (the 'gainer') who gets sexual pleasure from eating and fattening up. Groovy, huh? However, the main feeder here is a special kind of motherfucker: he feeds the women until they die, and shows it all on his website where people can place bets on when the women will die. Not groovy at all.Director Brett Leonard's career started very promising in the 90s where he had some major hits with movies like "Virtuosity", the Dean-Koontz-adaptation "Hideaway" and the not-really-Stephen-King-adaptation "The Lawnmower Man" - but then something seriously went wrong and he ended up shooting Siegfried & Roy documentaries, and rubbish like "Man-Thing" or "Highlander: The Source"..."Feed" (which was made in between) feels like a last gasp of that once so promising director. As if he wanted to say: 'Hey! I'm still here, alive and kicking! And I'm about to shock the shit outta you!' :) 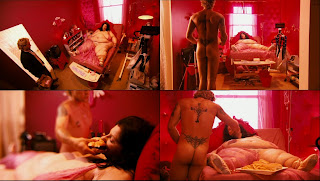 People with a weak stomach should stay away from this - everyone else gets 95 minutes of fat women eating, vomiting, having sex and dying. A hilarious opening scene where the main character strokes his dick while feeding a massive woman with hamburgers, a ramshackle house packed with bags full of carved fat and decaying, maggot-infested remains of bodies, and a funky Rohtenburg-like killer that cuts off his lover's penis and fries it in a pan. 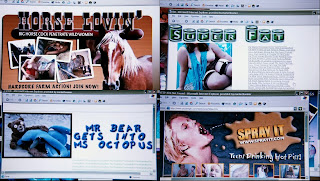 The plot feels like it's cobbled together of 90s David Fincher and early-00s Takashi Miike, nearly all of the characters are unsympathetic and the acting is meh - but this is tolerable when you look at the hilarious amount of fat, gore, puke and boobs, people dancing to "Itsy Bitsy Teenie Weenie Yellow Polka-Dot Bikini", screenshots of websites like "Horse Lovin'" or "Mr. Bear gets into Ms Octopus", and hilarious dialogue lines like:"I go away for a few months and you pierce your clit?""Do I look dead to you, pussy-boy?""If all the honey in the world came from this little spout, my brave little man could lick it all out."Hungry for some sick shit? Try "Feed"! xDWiki ~ Imdb 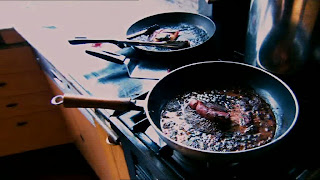 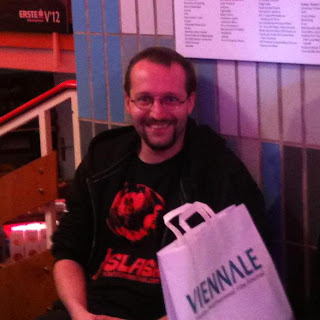 Maynard is a  huge Fan of Morrissey, Bret Easton Ellis, Maynard James Keenan and Horror Movies. Make sure to check out his page Horror Movie Diary here.
Posted by Guts and Grog Reviews at 2:55 PM