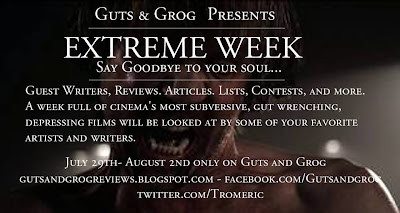 The time is here. The last theme week I put together for the grog, was all about children's horror. It was a blast and I got so many great contributions. I instantly wanted to put together another one. It took a bit, but it has all come together. I also figured if I was gonna do it, I wanted to go as completely away from the subject matter I started with. "Horror with Training Wheels" was a blast, and figuring out where everyone's love for horror started interested me. With "Extreme Week" I wanted to dig deep into the dark side of things. Why do we seek out such terrible things? Why do somewhat sane people want to watch people being gutted, dismembered or having their entire life ruined? I know it is different for everyone. It is also a broad term.

There are extreme films such as Cannibal Holocaust, Nekromantik, or Faces of Death that challenge with their brutal gore. Films like Irreversible, A Serbian Film, or I Spit on your Grave take you on a brutal ride full of rape, hate, and torture. They make you question yourself , and this world. Then there are filmmakers like Lars Von Trier that don't necessarily bask in gore, but will leave you feeling like nothing matters. These films are not for everyone, but  for us that embrace them, they can be quite therapeutic. People constantly ask me why I subject myself to some of these films. I have seen A Serbian Film at least ten times. I took my mom to See Cannibal Holocaust in 35mm, I will sit down and watch four Von Trier films back to back, just to see if I can.

Throughout the week expect to see write ups, lists, reviews,interviews, art,  and more. I got together a great group of artists and writers to tackle many of the films you would expect, as well as some you might not think of. There will be three contests throughout the week, that I promise you will want in on. Critters and Gods has a one of a kind print for me to give away that may make you shit yourself, VonKlingele Kustoms has a figure that will have you begging to sit on a bicycle with the seat taken off, and Blood Bound Books has donated an anthology full of extreme literature's who's who, including a story by one of the contributors.

I am very excited to be presenting this week at the grog. It is something I have been wanting to do for a while, and it is nice to see it come to fruition. I almost postponed it as this last week I lost one of my closest friends. He was a friend to the grog, and on top of that a brother to me. Instead of postponing or canceling, I have decided to dedicate "Extreme Week" to him.  I will never forget the years we spent together. Whether it be talking about the Skid Row concert in middle school, smoking cigarettes and listening to records all night, horror film marathons, a six pack and a porch. The list goes on. I will hold all of these memories close to me.

- Tromeric
Posted by Guts and Grog Reviews at 6:08 AM

Proud to be a part of that blogfest. It's getting extreme! :)

Rest in Peace to your friend :(

I'm proud to be an agent of the extreme and honored to take part in paying tribute to your fallen friend.

We shall gather the extreme ones and share our experiences of the depths of darkness. I am honored to be a part of something so meaningful for you. R.I.P to your dear friend.

Somewhat new to extreme films and enjoying reading what has been posted so far.

Totally excited for this week man. Here's to making your friend proud.