TIME TO PUT YOUR DEATH FACE ON – Raw Meat, Pixy Stix and THE FACES OF DEATH 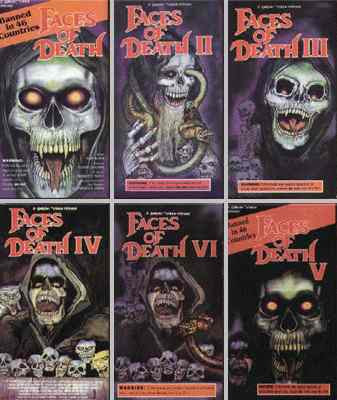 It all comes back to raw meat. Not the British horror flick from the 1970’s also known as Death Line. Actual meat that is the by-product of a dead animal, splintered and severed and wrapped in plastic and then served up on a plate after making its way, indifferent, over a grill. I don’t want to get into the politics of it. It’s really just the root, the beginning. A point from which my love of Faces of Death begins. It’s a story that I absolutely must tell you, so that you might preclude judgment upon me in the face of the video you are about to endure or enjoy or suffer through. It begins with meat. We end as meat. Here’s a story. 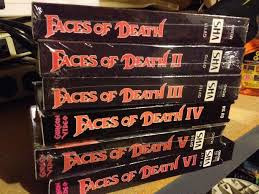 I can’t give you a year, but I can tell you that my buddy and I used to watch a whole lotta horror. Army of Darkness was out on VHS, so if that’s a reference point, use it. A.D. – After Darkness. We would go to Long Valley Video. We would rent horror movies, and we would read from the Leonard Maltin video guide as if it was our Bible (Ebert fans can suck it). Maltin’s book had a fairly thorough horror section or at least I thought so for the time. This was before the age of DVD and digital. This was an age of video piracy and sharing groups and catalogs straight from the back of Fangoria. It was perfect for our purposes; we wanted the horror movies with the most “gratuitous” nudity. That’s what Maltin would say of the nudity. Gratuitous. It’s a word like “gore”. It truly means excessive, but when you’re an adolescent male who has just discovered your dad’s porn collection, it means satiating an uncontrollable hunger for the all mighty mammary gland, boobs. So we would read from the pages of the video guide and good ol’ Leonard would demark wherever a movie was brimming with “the good stuff”. Pieces or Make Them Die Slowly. Zombie. He’d give all my favorites a “turkey” rating. If Leonard Maltin rated a movie a turkey as opposed to a star (one through five) that meant it went on our list and we’d have to locate it. Gradually the transition from pure nudity graduated into a need to watch more extreme films. More gore. More blood. More debauch. There would come a time when Long Valley Video wouldn’t have what we needed to thrive, but not today. Today it was our library of the macabre. Our tape… FACES OF DEATH.

Read the article first then watch. 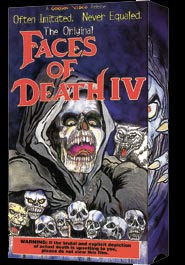 You walk down the aisles of a video store long enough over many visits and you’re likely to come across some pretty groovy shit. I can remember House by the Cemetery peaking at me from a shelf too high for me to reach for years and when I finally got to see Dr. Freudstein on the reverse he gave me beautiful nightmares. Same goes for Mark of the Devil. Funhouse. The baddie bad movies that my father didn’t want me to see. For some reason, even though the aforementioned movies (a list that might extend on for a bit) were strictly forbidden, my dad didn’t seem to have a problem with me watching Faces of Death. I went in after staring it down for several weeks, picked it off the shelf and rented it. It was Faces of Death IV and not the mondo original classic fake fest. It sat next to the Worst of and was released by the Medusa branded Gorgon Video. I was enamored; love at first sight and it was mine. Black protective tape case with all the hallmark 80’s markings that it came fresh out the video store. Getting up the guts to actually ask my dad if I could rent it was a whole other matter. Intense prep and timing, but we got our movie. It wouldn’t be our last.


Note: Someday I’ll reveal the great Codeine binge of the early 90’s as narrated by Camille Keaton’s generous rape sequence in I Spit on Your Grave followed by an intense night of Sonic the Hedgehog. Just not today. End Note.

I truly didn’t know what to expect except that when you looked it up in Maltin’s book you got a back story of the original film and not the sequels. From what I read I knew that we’d have to wait for my parents to go out for dinner or something. Something that left me home without a parent. Even though I got the movie into the house if mom saw me watching real people dying on screen, well, the proverbial jig would be up, sky high. We were going to have deli sandwiches for dinner. Roast beef for me. My parents left for the evening, tape went in and I continued to enjoy a juicy rare sandwich without much thought. I have a strong constitution for these things, and I don’t mind puking. Not one bit, but aside from some poor substance abuse choices and IPA hangovers, it really wasn’t an issue. (Don’t mix horse painkillers with red wine…ever).

I cannot tell you when it happened; what scene inspired it or how it turned a normal couch potato session into a toilet marathon, but my friend, who was in all fairness more squeamish than me, tossed his cookies. He was watching me, watching the people get cooked and drawn and quartered and autopsied. Fat spilling all about. Limbs ripped from torso. Giant leaches from a lake. Stupid people dying in stupid ways. Smart, successful people killing themselves on screen. He watched this and he watched me eating that damn roast beef sandwich. The result was insta-vomit. Projectile puking. I assume he puked in his mouth, caught it, tried to swallow it so as to not lose his shit on my parents rug, but then he had to put it all in the bowl. That’s how it all starts with meat. And what started? From that moment on I was a mondo junkie. There’s a competitive rush that you get when the guy next to you can’t handle his movie. It didn’t happen often, but it happened the first time we broke the mondo barrier.

True death, 400 hamburgers of maximum performance. (to paraphrase Rob Zombie). I sought out, for a short while, all of the best mondo, true death films I could find. Many Faces of Death, Faces of Death, the sequels there of, Traces of Death which would become my personal favorite because they were brutal and had the best death metal (Traces of Death II to be precise), Mondo Cane (both parts), Africa Blood and Guts, Shocking Africa. I forget them. When I see the covers come up on VHS trading sights I fawn over them and try to resist the urge to send people money even to this day. There are more real movies than the Faces of Death especially part IV, but you do not forget your first. Faces of Death IV and consequently the Faces of Death series was a benchmark for all subsequent mondo. More extreme than. Less Extreme than. More real scenes of carnage vs. reenactments a la mode. It’s a personal standard with no value other than it was standard I set and enjoyed until the video stores stopped buying new tapes and the old ones broke or the video stores moved on.

So if you are reading this, that’s why I recorded myself eating absolutely raw meat while watching scenes from the original Faces of Death, the Blu-ray released this past year. Because I had to try and out-do myself, and raw Filet Mignon out-does roast beef sandwich like rock out does scissors. Why the pixy stix? That’s a promise to the DOCTERROR people who got me to a certain benchmark on Facebook, and I fond memory of my early days of marathoning. You mean to tell me that you didn’t snort a few pixy stix while watching all of the Friday the 13th movies back to back to back etc.? Oh it burns… you gotta love the taste running down the back of your throat and the drip down the front of your face that you can’t help but lick because it tastes so darn good.

For a movie that was released in 1978 and grossed (grossed!) $30 million plus, Faces of Death is undeniable as the most popular piece of mondo. It wasn’t the first, but it’s the one you know. Banned in 42 countries and a tremendous marketing campaign assured its success. Throw in Dr. Francis B. Gröss as your lovely narrator, a pile of stock footage of true death straight out the news room, a generous helping of fictional accounts of scenes of actual death and some instructional autopsy videos and you have a movie you cannot look away from (unless you’re ready to spew). They made six of them and a Worst of (I only found out about number 6 while making our production after I made reference to it in the “grill” scene.

Be well. I hope this makes you laugh. We had a blast making it, and I didn’t vomit. Not once, but if you’re going to eat raw meat make sure to add some seasoning or a dipping sauce because it’s kinda bland and chewy. Thanks to Tromeric and Guts and Grog for holding my hair back while I vomited this article up for EXTREME WEEK. I saved you a filet. 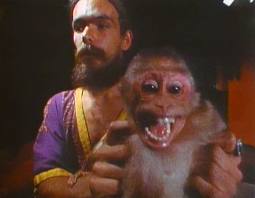 No animals were harmed in the filming of this short except for the one I put in my belly, and that damn monkey that never stops spinning in that wood stockade (but that’s director, Conan LaCilaire’s problem I suppose). 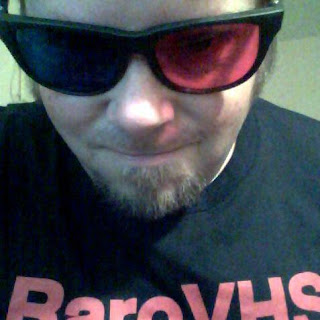 Dr. James Terror has many aliases. Dr. Terror knows where and when you sleep. Dr. Terror knows what you had for breakfast and thinks you may want to consider milk with a lower fat content. Dr. Terror is a horror host. Dr. Terror does not work for a television network, cable company or radio program... How is Dr. Terror a horror host with no show to host in any reasonable hosting outlet? Dr. Terror hosts the world... of horror... and terror... and words you find in the Thersaurus related there to!!! tee hee hee: Check out The Doc Here.
Posted by Guts and Grog Reviews at 6:19 AM