Jeremy has done up a beautiful one of a kind print for this week. It will be signed and numbered by him. There are few films as extreme as Salo in my opinion. This is  a movie I sought out as a child, and finally found it and had my brains blown out.

Now look at this beauty. 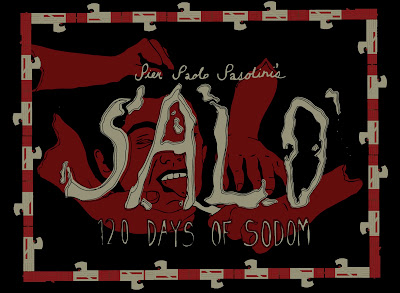 Click on it to see it in all it's glory.

Now, how to win. Leave a comment here telling me your favorite foreign horror/dark/extreme film, and share one of the posts on the Twitter or Facebook. At the end of the week, I will take everyone that has done that and randomly pick a winner. It's that simple. Now get on it. You need this on your wall. 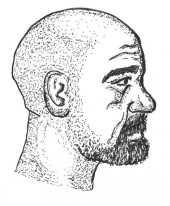 Jeremy is a published writer. His books include "What the Master Does Not Speak Of – Poems and Drawings by Jeremy Gaulke" and "The Ghost of Harrison Sheets." He runs Critters and Gods which is an art zine inspired by H. P. Lovecraft. It features black and white and color illustrations depicting life, symbolism, and ritual in a post-Cthulhu world.
Posted by Guts and Grog Reviews at 3:30 PM

My favorite foreign horror film has got to be "Martyrs". As far as extreme film goes, I would say either "A Serbian Film" or "Audition".

I've got to go with Micheal Heinke's Funny Games, easily the most emotionally draining film I've ever seen

Martyrs, Inside, and Serb for me. I always hate myself after watching them, but I always come back for more.

At first I wasn't sure about it but THE HUMAN CENTIPEDE is growing on me as a film. It's more elegant that the subject matter leads you to believe.

Favorite foreign extreme is cannibal holocaust, with Martyrs close behind.