Brobocop Gets In My Skin 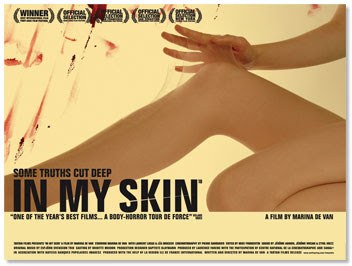 Story:﻿
Esther and a friend go to a party and get their drink and groove on. Esther wanders off in the backyard and suffers a pretty nasty fall. She's all like “whatevs” and goes back inside to get some more dancing in. Eventually, she takes a trip to the bathroom where she realizes she's bleeding out of her leg like a stuck fucking pig. Shit, I guess the fall had something to do with it! Well, time to leave the party and go to the hospital. But not before stopping off to get a few more drinks first -if I'm being honest, that's probably exactly what I would do. Anyway, Doc patches her up and sends her on her way, but not before showing concern towards Esther's nonchalant attitude about her leg looking like fucking pizza. Esther becomes increasingly mesmerized with the boo-boo and starts playing poke with it like a lame friend on Facebook. Playful poking turns into less playful picking, then nasty gashing, then, well... shit gets fucked up on a MEGA scale.

Dear In My Skin:

Spoilers beneath the scabs. Pick with caution

When Tromeric let me know about Guts and Grog's Extreme Week, my first choice for what I wanted to cover was In My Skin. Of all the nasty, deplorable, skull fucking, animal murdering, kid torturing, tribal raping shit I could have went with, I chose a film about body horror. The reason being is that I feel somewhat drawn to the main character, Esther -played by writer/director, Marina de Van. Uh-oh, confession time. I am a scab picker. Wound ripper sounds much more badass, so that's what we will go with. I am a wound ripper. I know it's filthy, I know it's unhealthy, I know the wounds can get infected, I know it grosses my girlfriend the fuck out... hell, it grosses me the fuck out. And it hurts, but it “hurts so good”. John Mellencamp had the right idea; he was just singing about the wrong shit. Most of the time it's kind of a mindless thing, or something to do to pass the time. I don't feel like that's totally the issue with the lead in this film. But where me and Esther really separate is the whole self infliction of wounds and imbibing from them. I do not puncture myself, and I do not self consume. I'll pick a bug bite or a cut until it's destined to be a scar, but fuck being the harbinger of the injury, or a cannibal. I just like to keep the injuries going, for some dumb ass reason.

At face value, In My Skin may seem rather tame in comparison to a lot of other extreme films. I am here to assure you that it is not. It's actually quite a test to not wince out or turn your head more than a few times. Even when Esther is ripping her flesh off screen, her cold expressions and the sounds of tearing skin revs up the intensity to fucking overdrive. This is no picnic in the park or a Sunday visit to Grandma's, unless Grandma eats herself. Do you remember when undead Jack first goes to see David in the hospital in An American Werewolf in London? Sure you do. Do you remember that one jiggly piece of skin hanging from Jack's face that does a fucking dance whenever he talks? If that little piece of shit had a whole film dedicated to itself, it would be In My Skin.

There's some fantastic visuals, and they play alongside the deterioration of Esther's character perfectly. Creepy following shots and great 3rd person perspectives. Lots of closeups of Esther's face while she's committing these crimes to her body, and there's rarely any shying away when it comes time to show all the nasty shit going on. My favorite sequences are all the split cam shots that give a slightly different view of things. And the blur walking scene that comes late in the film -once Esther has really fell off the reality cliff- is incredible.

On the acting front, it's all about Marina de Van's execution, here. It's absolutely fascinating. Esther is a character whose life is slowly slipping through her fingers. She doesn't really feel the pain she's inflicting upon herself, just as she seemingly doesn't feel her detachment from everything going on around her. Is she aware of how far down the rabbit hole she has fallen? de Van kills in this role. As for everyone else, it's not an issue of anyone under performing; it's just not about anyone else. Laurent Lucas plays Vincent, Esther's boyfriend. He has more to do than any other secondary character, but I feel like it's just a display for what's going on with our leading lady. It's no doubt obvious that Vincent is worried for his girlfriend, but he often comes off as making it all about his and her relationship. Of course, he has good reason, because Esther surely gives no explanation as to why she's doing what she's doing. But equally for good reason on her end, as she simply seems to have no idea why. Again, back to de Van, she is just completely awesome in the role.

Now, onto the factor of why In My Skin is a prime candidate for Extreme Week- THE FUCKING GROSSNESS. This shit looks real, folks. So real that at times I feel the need to question if any of it is. It all starts with a pretty nasty leg wound, and as the film progresses, said nastiness just flies off the rails. However, sometimes it's not so much the visuals of the wounds, but rather how Esther treats her body. In a bathtub she stretches the skin in her pelvic region so far out that it looks like she's playing with a giant wad of goddamn bubblegum. For some reason, that scene is quite foul to me. But once we get to the areas where she starts tearing at herself and the way she pinches arm skin tight between her fingers, it's pretty damn stomach turning. But nothing, NOTHING is on par with the eating of herself in an almost orgasmic manner.

I don't have a whole lot to say about the soundtrack. It's in no way bad, it's just that a lot of it didn't stick out to me. The theme song kinda had a Radiohead Kid A likeness about it, so I was on board there. Actually, much of the music has a similar ambiance to said album. Like I said, not bad at all, but this is one of those films where the music doesn't really contribute to the atmosphere of the film.

WHAT IN THE FUCK?

Final Thoughts:
I'm not sure I would consider In My Skin underrated so much as just really under the radar. I rarely see it come up in conversation. It's a fantastically dirty ass little piece of French cinema. Sit down with a brew and take a gander, but leave your fucking wounds alone! 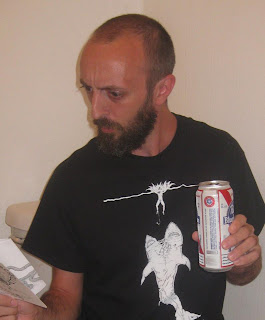 I'm a kid stuck in the body of a 35 year old douche bag dude with giant tits. Sick jams, flicks, booze and weed... that's all the fucks that Brobocop needs!
Posted by Guts and Grog Reviews at 6:00 AM

Ha, what an "extreme" coincidence posting about the same rare movie on the same day :)

Excellent review and some fucking awesome gifs, buddy. Nice to see that there are others who love it as much as I do.

This one has been on my radar as a flick I wanted to see but haven't. After that review, it just moved up the list.