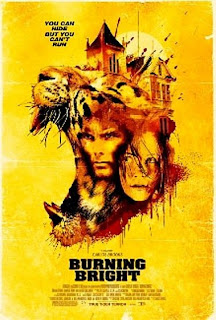 So a cute girl and a sped(oh sorry I beleive the PC term is tardburger) get locked in a house during a hurricane by their asshole step dad. Oh did I mention they are being stalked by one pissed off tiger?  This is the basic premise of Burning Bright.  No this is not a joke, it also isn't a made for Syfy movie. What it is is way better than it deserves to be.  Its like a decent slasher movie but you replace Michael Myers with Sigfried and Roy's arch nemisis.  It starts off with assdad meeting Meatloaf for a sketchy transaction to buy an evil tiger, then the daughter is trying to enroll her tard brother in some home, he's not like Corky tard, he is the I'll remember the whole dictionary and make sure you spread that peanut butter to the right and not to the left kind of dooode.  She feels bad cuz her mom offed herself and she doesn't want to abandon her little USB drive.  She wants to go to college though and she has some great plans to learn how to answer a phone or some shit.  I don't know why she doesn't just buy a stack of phone books and put him in a cage, he will keep himself busy.  Anyways here asshole step dad found her bank account and was able to clear it so she cant afford the school for abandoning her bro. Turns out he spent that money to buy said pissed off tiger.  Now he needs more money so he boards up all the windows and doors and lets loose the beast to kill off these pesky kids so he can get the insurance money. This is where I get confused, after all of this insanity and the fucking fact that this is a home invasion movie staring a tiger as the big bad Krug and this all takes place during a hurricane because the best way a dude could think of killing off a couple of kids was to set up a Rube Goldberg trap that P.T. Barnum would be jealous of.  With all of this said it is entertaining, full of suspense and looks amazing, they did not use any CGI that I could tell, its always a real tiger. I don't think you can properly describe this as it sounds insane and it is just something that needs to be seen to be believed.  So go watch it, Jesus fucking Christ why are you still reading this bullshit, go to the store and hook that shit up.

Posted by Guts and Grog Reviews at 4:01 AM