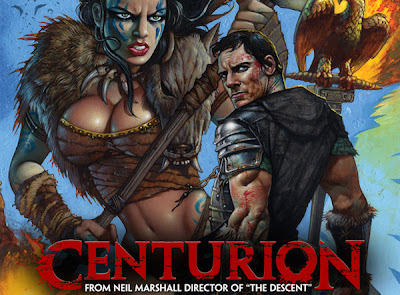 Neil Marshall is a weird mother fucker.  From Werewolves to caves to the apocalypse to this. I personally have enjoyed all of his films for different reasons but so far so good. Now on to Centurion.  The epic movie has been attacked many times and while occasionally it works for me its few and far between. It just seems like most of the time  spend the first three fourths of the film watching these people wander around or ride their horses and maybe something cool might happen, maybe they will just walk around for ten hours to get to a lake.  Not this one, within fifteen minutes bitches were getting their heads ripped, slammed, speared, smashed and cut to shit.  It was like Braveheart with less Jew bashing. This is an hour and a half of badassary. How can you not love the Romans, they fought the most epic battle ever when they put that carpenter on that cross and created that Nausea record cover.  Its like watching a porno where the guy cums 182 times in one film.  The story here is basic but interesting, I wont go into it as it is not important. I don't mean that it isn't well written because it is, I mean you already know if you want to watch it so I'm not gonna waste your time. I don't have to much to say on this, Its a lot of fun, its interesting, its well done, its violent as fuck and its Neil Marshall. Do you need much more than that.

Tromeric
Posted by Guts and Grog Reviews at 1:31 AM

I have this one sitting in a pile of "to be watched". Tonight might be the night.