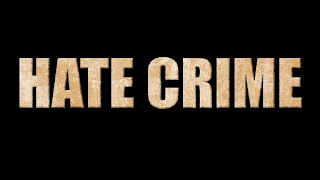 All I knew about this going in was that it was a found footage version of a home invasion film. Those two things alone left me with the assumption I was going to care about this film about as much as Dennis Rader cared about his victims. The last time I really loved a found footage film was "Cannibal Holocaust." Sure, "The Blair Witch Project" and "Paranormal Activity" were fun in the theater but I forgot about them as fast as Guy Pearce forgot who Joe Pantoliano was in "Memento."  I am happy to report that like Mike Ness, I was wrong. Within seconds of "Hate Crime" starting I felt like coach was elbow deep inside me. He wasn't just molesting me, he went in and played with my insides. There was no foreplay, just pain and remorse.

The only plot description I will give you is the one I got and is ripped right off the IMDB page. " A family is held hostage by sadistic home intruders" Kind of vague right? Well, that is all you get. I will not give anything else as I want you to feel the despair and pain I felt. Dahmer didn't walk up to his boys and be like  " Hey, I am going to kill you, rape your corpse and eat you while I watch the nightly news."  He left it up to their imagination.

As I said earlier "Hate Crime" is a found footage film. Usually that means that the technical side is unimaginative and boring. Not in this case. I was more than impressed with how this film looked. Not only did it look good, it was believable. Unlike most of these movies it is in real time. The cuts were hidden and clever. I was constantly thinking of Carpenter or Hitchcock, now before I get a bunch of hate mail I am not comparing this to "Rope" or "Halloween." Just pointing out the editing style, which I assume Mr. Bressack was inspired by. The only real complaint I had technically was the sound design, and to be fair I watched it streaming online so that could of just been a byproduct of that.

Overall the acting in this blew my mind. Maggie Wagner and Tim Moran specifically were standouts for me. In a just world we would see them accepting an Academy Award at next years ceremony. There were a few moments with some of the cast where I was pulled out of the moment with less than excellent acting. I can't complain to much as these roles took more balls than Randy from "South Park" had in the "Medicinal Fried Chicken" episode.

"Hate Crime" is not a movie for most people. If you watch movies only to be entertained, stay as far away from this as that girl with the sore on her lip. If however, you like to be challenged mentally, emotionally, and morally this needs to be seen. Seven minutes into this I found myself searching the internet to make sure I had not been sent a snuff film. While not being perfect, I can attest this movie will be inside you for a good long while and there is not enough episodes of "Gummi Bears" to cleanse yourself of it, believe me I tried.

Tromeric
Posted by Guts and Grog Reviews at 3:50 AM