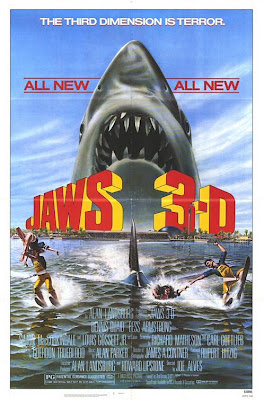 Thanks so much for Tromeric having me over here to tackle a guest review. A collaboration was long overdue.

Synopsis:
The Brody brothers have another shark problem, this time at SeaWorld. That Amity Island shit got old.

Dear Jaws 3-D:
Talk about some more behind the scenes Jaws shenanigans... this flick went through all kinds of shit before being filmed. The producers of the first two Jaws movies wanted to go the spoof route, using the title Jaws 3, People 0 --with National Lampoons writers John Hughes and Todd Carroll scripting and Joe Dante in mind as a director. Let me just say right now that said pitched title for the spoof was fucking genius, and they should have stuck with that name anyhow. Goddamn. Anyway, Uni wasn't having any of this shit; no spoof movies. So, Murray Lerner was given a copy of the first Jaws 3 script and declined, and the job eventually went to Joe Alves, who served as a production designer on the first two Jaws films -- as well as being second unit director on Jaws 2. Like the first two "da dum da dum da dum da dum" movies, this one had many different writers and re-writes. Richard Matheson even had his epic hands in it. Eventually, most of his ideas were put on the back burner, so Guerdon Trueblood gets the story credit while Carl Gottlieb --who revised the first two films-- and Matheson got the script credits.

Lemme go ahead and talk about the shark here, too. Believe it or not, at one point the idea was to have Bruce 2 from Jaws 2 survive and I guess come after Mike Brody or some shit. Well, that got kicked to the curb. There's actually 2 sharks in Jaws 3-D, a mother and child. The child is kind of a pussy, so the mother is who's important. Bitch gets pissed. 35 feet of fucking nightmares, swimming backwards, headbutting underwater walkways, roaring... that's right, ROARING. This is one not to be fucked with. Anyway....

Jaws 3 is knee deep in the 80s resurgence of the 3-D gimmick, like Friday the 13th III and Amityville 3-D. The quality of 3 dimensional FX from this era is highly questionable. Okay, most of it is pretty goddamn bad, but I love it anyway. Maybe I just love looking like a douche in my living room with those crazy glasses on, convincing myself that shit really does look like it's popping out of the screen. I dunno what it is, but I dig it.

Jaws 3-D moments that are supposed to be punching you in the fucking face:

Cam work is of course not up to par with the first film. Hell, it can't even touch the second film. I probably should have mentioned this earlier, but I forgot, so let me get to it now. Jaws 3-D is so fucking good because it's so fucking bad. There, moving on. The shark creeping segments are still pretty good and there's a few fairly badass chases. This film definitely amps up the "skier being pursued by a shark" element, though, it does lack as far as anything actually happening to the skiers once they are in danger. But we'll get to that later.  Brody has an awesomely manic POV golf cart sequence, and that may be the highlight in this department. Either that or the underwater shots of the 35 foot bitch, barely visible in the murky blue waters. Gotta say, the darkness definitely adds some cool atmosphere.

Mike Brody's all grown up and looking like Dennis Quaid... because he motha fuckin' is. Brody's not the whiny little wimp he was the second go around; he works for SeaWorld designing shit, smokes cigs, drinks beer, acts like a stud around his woman, and is willing to fuck a shark up! Quaid is pretty entertaining in the role, despite being embarrassed of it or not. Bess Armstrong plays Kathryn, Mike Brody's squeeze, and senior marine biologist of the park. Armstrong kinda looks like Frances McDormand, if Frances McDormand was hotter and not a very good actress. Nevertheless, Kathryn is a cute character and the duo of Quaid and Armstrong gel pretty well together. John Putch is little Sean Brody in this flick, also all grown up and now scared shitless of going in the water. He comes down from Colarado to visit his big bro. Putch is annoying as shit. Actually, it's just the character in general. It's like the Brody brothers traded places in the "who's the pussy?" department. Louis Gossett Jr. portrays SeaWorld park manager Calvin Bouchard, a money hungry bag of fuck. To be honest, there's a few times where Bouchard doesn't come off like that bad of a man, but he always relinquishes those good thoughts with assholism. Gossett pretty much nails the correct feel- there's one scene in particular where he gets on an intercom, calm as ever, instructing people that they need to safely exit the underwater portion of the park. Meanwhile, there's a 35 foot pissed off shark about to crash the festivities. Lastly...

Lea Thompson, making her screen debut as Kelly, a water skier at the park, who ends up getting the hots for Sean Brody. Thompson is so insanely hot in this flick, parading around half the time in just a bikini and sometimes a cowboy hat. So, before falling for her son Marty McFly and before snooping through Howard the Duck's wallet finding a duckie condom, she was here.... looking fuckin' smokin'.

Bonus characters who I like that no one else probably gives a squirt of piss about:

Posted by Guts and Grog Reviews at 3:04 PM

Fantastic. I'm not even a fan of the movie, but this almost made me want to watch it again.

I'm with Mister Bones. All these hilarious .gifs really make me wanna rewatch this soon, although I know how much it sucks :)

Yeah dudes, this one is a total hoot. It's a bad film, but definitely entertaining.

Hey Tromeric, dunno if you gonna like this award stuff - anyway, here's a nice little award for you:
http://www.horrormoviediary.net/2012/07/holy-fuck-i-got-4-awesome-awards.html#more

two other craptastic sea critter flicks you should add are Piranha II The Spawning from 1981, this turkey has the distinction of being helmed by James Cameron, and Tintorera from 1977.