Subspecies, Or How I Spent My Post Oscar Hangover Day 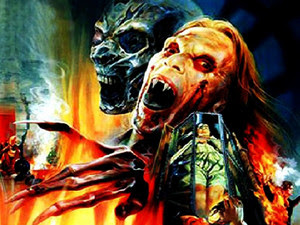 Sunday started with a day full of work as usual. I wanted this day to be over so I could start my yearly Oscar party. Sure the Oscars are outdated and usually wrong but I still have to watch. I don't care that they snub my favorite films. I am glad they do. I love sitting around drinking with friends yelling at the TV. It is probably the closest thing to a sports game I will ever care about. Well the Oscars came and went and by the end I was a bit inebriated. We continued the party listening to music, drinking and dancing. Well I was dancing. It only takes one for a dance party god dammit.  Well it was late and I puked my insides to the outside and passed out. The next morning I woke up feeling less than a hundred percent. I had to do something with myself so I looked around my room and saw my Subspecies box set. I hadn't watched any of them in years. Growing up I always would go for puppets over vampires so I figured it was about time to see what Radu was up to.

A couple of American girls show up in Romania to study Romanian culture with a friend. Radu shows up and kills the Tall Man. Radu wants these bitches but his brother is the nice one and loves their feelings. Radu wants their blood. He is cooler. The overall feel of this film is awesome, which is not surprising when you get a guy named Vlad to be your DP. It is Full of great sets and the countryside lends itself to the creepy nature of the film. There are some great effects in this. One moment is when Radu cuts off his fingers and they do a metamorphosis from gross finger to gusher, gusher to coyote dick, coyote dick to some awesome Harryhausen stop motion cyclops looking bastards. There is also a great scene at one the local rituals that is insanely unnerving. The whole town is dressed up and doing a ritualistic dance/parade in what looks like Muppet's costumes if they were designed by the Marques DE Sade. All in all I have nothing but love for the origins of this series.

This picks up right after the end of the first one. Michelle tries to escape Radu but he wants to bang her vampire style. She takes the bloodstone and runs. Her sister comes to help but Radu is one persistent bitch. This is probably my favorite of the series. The effects are fucking amped up like Jose Canseco in the ninety's. Some of the highlights are the head reattachment scene which is quickly followed by a blood geyser of awesome. Numerous stabs to the face and all around badassary. The plot is unique and at times turns into a random buddy cop comedy. The cast is awesome and features William Shatner's daughter and the final guy from Friday the 13th part seven.  They go to the coolest most realistic metal club that even has Beavis and Butthead style graffiti including the term "Metal Rules" as well as other super creative phrases.

A direct continuation from two keeps Becky and Michelle running from Radu. All the same characters are back and to me is the least impressive out of the series. Still necessary in its own right and not bad by any means just the slowest of the series. The mummy in this one is pretty awesome I will say. She is trying to keep Radu grounded but he wants nothing to do with it. He says "Fuck you mummy, I will train this bitch." There is some sweet shadow stop motion and a great melting scene where you find out Radu kind of looks like King Diamond when he is on fire. There are plenty of sex and death scenes to keep you happy including one where Radu is fucking some chick Frombee and draining her neck. That alone is worth it.

Not a direct sequel but it does take place in the same universe. Radu is mentioned and Ash ends up in Subspecies four. I really enjoy this one. I feel like I am watching the flashbacks in old episodes of Angel/Buffy or even the more recent Vampire Diaries. Zachary, who is the younger James brother in one of my personal favorite  films Real Killers is a vampire out to severe his bloodline. He has feelings and all that bullshit. He is still kinda badass in this. Well he is on the hunt for Ash who is being an evil weirdo. Their paths cross when Ash get this super hot Pianist(I said pianist you child) in his sights. Zachary wants to protect her because of those stupid feelings. I am not trying to paint this movie as a tweenish bullshit film. It's not. In the first minute of the movie you get nipples and a beheading. I like those numbers. There are plenty of great kills including a exorcist style forced head spin. In the end while not fully a Subspecies film this is a great watch and full of blood and boobs. Two of my favorite B's.

The final installment of Subspecies finds Michelle in a hospital after a car crash. The Doctor realizes she is a vampire and tries to help her. He of course also has ulterior motives as he knows of Radu and wants the Bloodstone. Ash also is there and along with his lady friend sets out to fuck up Radu's day.  They get help from the humans to get rid of him. Basically everyone wants to fuck over everyone to get the bloodstone.
A lot of people hate this one. It is by no means perfect but I still had a lot of fun with it. The opening is great and reminded me of Lethal Weapon four or Final Destination five with the montage of clips from all the previous films. The montage is a bit different as it is Enter the Void style with its fast cuts that would most definitely send a epileptic into seizure. Some of the effects are less than perfect but overall they work. This one probably has the most be headings and they are all bad ass. It ties everything up nicely and for a final entry works for me.

Well that is it for my revisit of the Subspecies series. In the end I was very happy to go back. In a time full of bullshit romantipires it was refreshing to see some Gothic vampires  that actually drink fuck and kill.

Tromeric
Posted by Guts and Grog Reviews at 11:55 AM