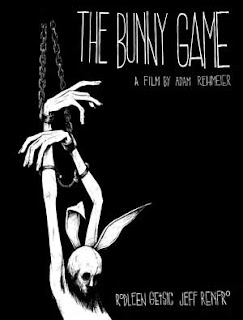 We are introduced to "Bunny" right of the bat with a close up of a dick in her mouth.  This isn't a blow job like I watch at night for two minutes to help me fall asleep either. This is dirty, empty and full of despair. We know this right away by her eyes, something I will get into a little later. First a quick rundown minus the Rock of the film that I had to hit the play button on again once it finished. The Bunny Game.
Bunny is a pro who will suck a cock for some blow. We see this right away as the film opens with blowjob to nose candy. She has some sex, gets paid and does a line. This is the first few minutes. She then is robbed and has a melt down. She gets in a semi with hopes of making some cash where she is kidnapped. She is tortured for the remainder of the film . Don't let this skew your opinion. This is not a run of the mill torture flick, This is just an overly simplified version as I never want to be accused of ruining a film.

Lets get back to Bunny. She is played by Rodleen Gestic, and not to minimize anyone else involved in the film but I think it's safe to say that without her this would be something completely different. This is possibly the most fearless acting I have ever seen. It should go down in history along the likes of Isabella Rossellini in Blue Velvet or Charlotte Gainsbourg in Anti Christ. There is such a miniscule amount of dialogue in this and yet you feel the torture and the pain she feels. The emotion she gives off with her eyes is unbelievable to me. Sure the things happening to her were far from pleasant and watching them isn't necessarily suppose to be fun but I think if it would of been an actor that didn't own the role as much as her it would of just ended up another shock for the sake of shock, run of the mill made by Lionsgate Saw sequel.
While the acting is the thing that impressed me the most that is not to say that the rest of the film wasn't given the love that it deserved. Adam Rehmeier directed/edited/shot/scored and co wrote along with Gestic. These are all elements that are obviously important to the outcome and he nailed it like the Romans did. It is shot completely in black and white and edited like the most precise seizure you could imagine. The music  punches you in the gut one minute and buys you flowers the next. When all of these elements are put together it is like the Planeteers summoning Captain Planet.
The Bunny Game gave me a soul just so it could rip it back out.

Posted by Guts and Grog Reviews at 4:59 PM

A few months ago, I saw a trailer for this whick looked pretty fuckin' insane. Will definitely (finally) check it out in the next 2-3 weeks.

It is. Brutal and awesome.