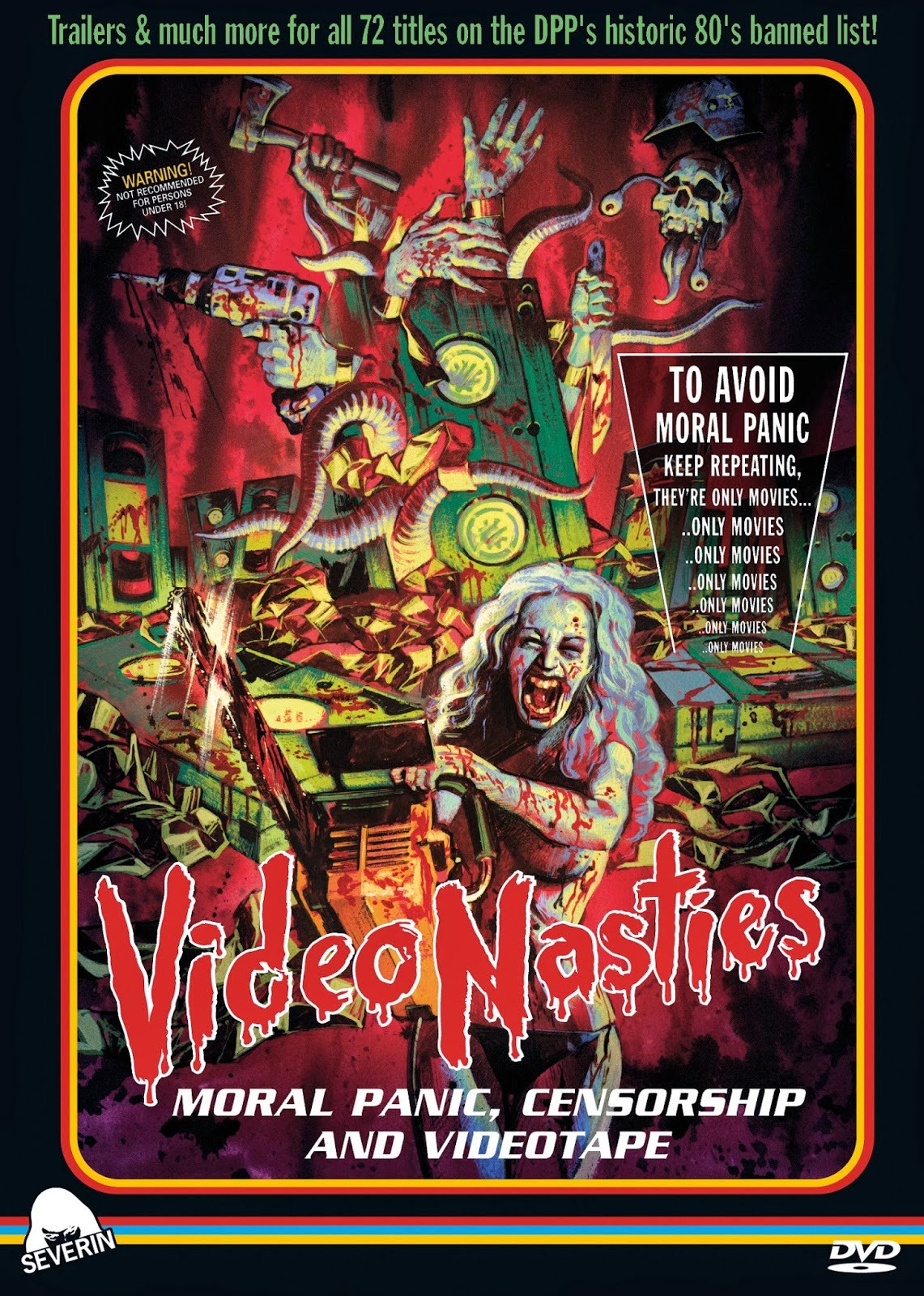 I was thrilled to hear Severin Films was finally bringing this beast to the States. Beforehand, you could only get an imported copy for out of print prices. I luckily was able to procure a copy when it was first released, but have since lost it, and was not about to fork out a hundred bucks for something I assumed would be in print again. I was right, and Severin came through.

The meat and potatoes of this set is definitely Jake West's(Evil Aliens) documentary Video Nasties: Moral Panic, Censorship And Videotape. It is an overall look at the 72 films that made this infamous list, as well as a history lesson of VHS invading your homes, or at least the homes of some British personalities that I am sure you will recognize. Since its initial release, we have gotten a couple of documentaries on VHS history. First with Adjust Your Tracking, and then with Rewind This. Those films made this part of the lesson seem regurgitated, but as I remembered, this was before those, and it only takes up mere moments of the film. It is also still interesting to see and hear from a different side of the world on these moments in history.

The film starts off with a graveyard full of these films being showcased. Imagine Sam Raimi building a contraption to go through the graveyard in one shot, while The Damned sing their amazing, and fitting song "Nasty." This basically sums up the opening. Sure Sam Raimi had nothing to do with it, but the amazing way this intro was filmed had his influence all over it.

Interviews range from film personalities such as Neil Marshall, Andy Nyman, Kim Newman,  and Christopher Smith. They tell stories of seeking these out as children. They wanted to find the sickest, most gruesome, yet entertaining films they could. They would rent them, and have parties to showcase them to all their friends. An action I very much can relate to. Where it changes from what I grew up with, is when the BBFC comes in and censors them, and causes a mass panic. I was lucky enough to  not have to deal with this kind of shenanigans. At least not until Blockbuster showed up on the scene and secretly did something similar, but alas, that is not what this is about. This is about the famous list of 72 films, mostly picked on solely due to title and cover art. It can be infuriating to see such reckless abuse of power, and those points are further driven home by stories of imprisonment, and businesses being destroyed.

Don't let this scare you off, sure it deals with these things, and they are important to our history, but it is also an amazingly entertaining film. Clips from some of your favorite 70s/80s horror flicks followed by brief commentary on them from an insanely interesting bunch of people. They even go into detail on how it affected culture at the time. Stories from many are told, as well as TV references, including, but not limited to The Young Ones and the episode "Nasty."

In the end this is 90 minutes well spent if you are a fan of cinema, specifically horror cinema. It is important to not forget the past, but that doesn't mean you can't enjoy a history lesson. This was a trip down memory lane, even if I wasn't directly involved in the movement.

Adjust Your Tracking, Rewind or Die, and kick Mary Whitehouse to the curb. Revel in your nastiness.

Discs two and three have trailers for all 72 films on the list, as well as introductions from Emily Booth on both discs. Disc two is the 39 films that were successfully prosecuted. Disc three is the 33 films that were originally banned, but eventually acquitted. You can watch these just as trailer reals, which is perfect for parties. Or, you can watch them with introductions from a variety of experts on the subject. With this feature you are looking at roughly ten hours of entertainment. I have watched through these before, but that didn't stop me from spending a whole day off doing it again for this review. These are full of great information, as well as hillarious anecdotes from a who's who of horror film and journalism.

This is a set any lover of horror, or history of cinema must own. The documentary is excellent, and that is the just the beginning. The features will keep you salivating for hours.

This will be released June 3rd and can be picked up directly at Severin, as well as many other outlets.

Posted by Guts and Grog Reviews at 6:14 PM