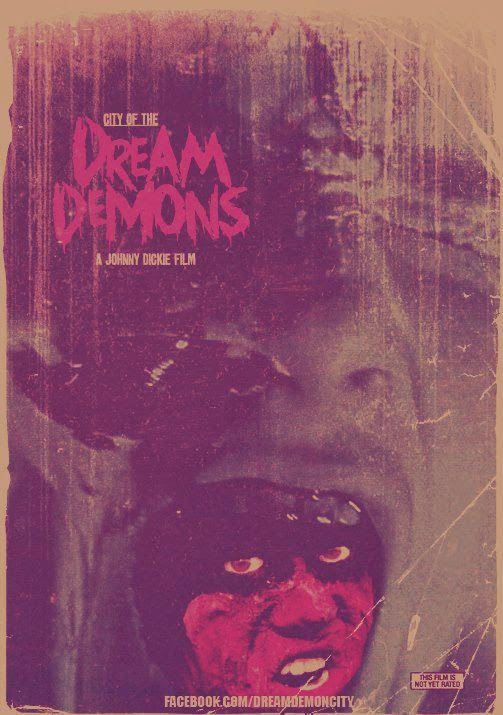 Johnny Dickie returns for his sophomore feature, Curse of the Dream Demons. His previous film Slaughter Tales was a anthology throwback to the SOV era of home video. City takes all of the elements that made Slaughter as fun as it was, and incorporates a more dreamlike atmosphere.

Tommy is a horror junkie living in the city with his eccentric mom. They moved there after an accident that doesn't get fully revealed until the end of the film. His friend Spat shows up, and they head out to inform everyone about an alley party. While they are out, they are attacked by monstrous creatures. As their friends begin dropping like flies. They must band together to stop the dream demons.

This film is not technically spectacular.  You won't walk away wishing for an Oscar nod. You will walk away with a shit eating grin on your face. This is made by horror fans. Specifically by fans of the SOV sub genre that came out of the video store boom of the eighties/nineties.

The acting is bad in all of the right ways. It has that hyper real, while being over the top feel. It almost was reminiscent of early John Waters, with long dialogues, over expression, and rapid eye movement. I have always been a fan of this. I am sure it stems from growing up in the eighties and obsessing over all of the low budget, independent, experimental film that was exploding onto the shelves.

The music is great in points, and also one of my only complaints in others. The score is excellent. Exactly what you would expect from it. Keyboard beats, and rocking riffs. Gets your blood flowing. The opening song is perfect, and accents the title card sequence brilliantly. The way the title card is animated made me feel like I was watching a Kuchar Brothers film, and the music just adds to it. My only real complaint however, is that I wish that the whole film had been score, and not songs. I find songs in films distract me. Unless of course it is part of a montage or something else awesome. I just have a hard time focusing on the dialogue with lyrics being sung in the background. This is a minor complaint, and in no way ruined my experience.

The main dish of this is of course the special effects, and they don't disappoint. Visceral in your face gore. Face ripping, gut munching, hell, even an intestine nunchuck  match. The blood is red, and it flows. Stabbings, shootings, axings, slashings. It really does have it all. Intestines squirt out like it's a goddamn Dr Dreadful's Food Lab.

Johnny Dickie has definitely shown growth, while I enjoyed Slaughter Tales. I loved City of the Dream Demons. It is amateurish not out of  lack of ability, but out of love of the genre. It is a little more ballsy than most micro budget horror films. It toys with reality, while still being a in your face gut muncher. It never really drags, which is pretty impressive for a film like this. It knows what it is. A trashy, low budget, blood riddled, sleaze fest. It is not afraid to own up to that. No filler, all killer.

Posted by Guts and Grog Reviews at 8:59 PM

Ya know, I've never seen this. But it sounds absolutely amazing!