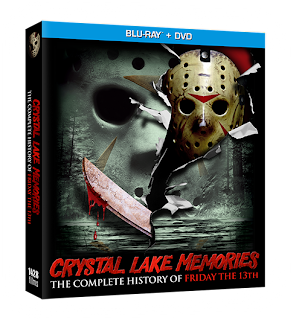 I have lived with Friday the 13th my whole life. The first one came out the year I was born, and by the time I was six or seven I was watching them all religiously after I caught part five on cable and fell in love. Through the years I continued to watch them sometimes one at a time, sometimes in marathon form, especially on any Friday the 13th that popped up. Jason is a huge part of our culture, and I dare you to find someone not familiar with his name.

"Crystal Lake Memories" spends just shy of seven hours going over every detail of the process of bringing him from the bottom of Crystal Lake all the way to space, or even pot fields. To some that might scare you off. I mean seven hours is a long time, don't worry. It's worth it. I put this bad boy in and was hooked right off the bat. I watched the entire thing in one sitting, then turned around the next day and watched it again, with commentary.

You will learn and hear from a large majority of people that have been involved over the years. I could nitpick that some are missing, but with this many people involved it is not realistic to get everyone. Sure Kevin Bacon was busy, but for that there are hundreds of others that took the time to sit down and reminisce on all things Crystal Lake.

It comes as a DVD/Blu Ray combo pack, so no matter what your watching preferences are you're covered, unless you prefer VHS, but we can hope for a future special edition while we enjoy it digitally. It looks and sounds fantastic. Every backdrop is great, and the sound is sharp the whole time.

As far as special features, you get a commentary. That is right, a seven hour commentary. I watched this directly after the feature, and was shocked that there was so much more to say after I watched a seven hour documentary about it. They stay talking and interesting the whole time. That is about it as far as features go, unless you pre-ordered it, then you get a  bonus disc with four more hours of material.

From the second it starts you can tell that "Crystal Lake Memories" is a labor of love. It took years to put this together, and I don't know if it would be possible to get a better end result. This is the end all on Friday the 13th. Made with blood and love.

You can order the disc directly from Crystal Lake Memories here, and I promise it is worth it.